Quite unknown and superb game in the same time. You don't see those every day, don't You? Anyway, Nomad is much like modern Elite. You'll have to do Your best to survive in space by both combat and trade while You search for the origin of an unknown civilization that brought the hyperdrive technology to humans. Quite a game with some small turndowns. You'll definitely enjoy this one if You like Elite and Privateer!

I almost forgot about this one! But then I saw someone requesting it on IRC. Well well, I uploaded it for him and he told me how GREAT the game would be. So I checked this game out once again - and yeah! - he's right. A little bit like Starflight, maybe more like Star Control (2) and a bit of Frontier. An alien spacecraft crashes on the Earth and you set out as captain of the repaired ship. Just after leaving Earth you're greeted by a nice furry alien, you find out about the Alliance and the evil Korok and you're right in the Game! Uh - wish I'd discoverd this treasure before - lying around on my Harddisk for months... A definite MUST!!!

One of the most overlooked classics of all time, this is essentially Starflight with a much more developed and interesting plot (although with less sophisticated details and interface): an alien ship that mysteriously crashed into earth suddenly gives mankind the hyperdrive technology. As captain, you must pilot the craft into unknown worlds to find out its origins. Despite ridiculously simplistic combat, the game has many memorable alien characters and trade goods. It's also very non-linear, and there's *plenty* of dialogues and sub-plots. 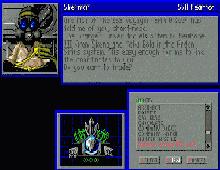