One of the best space trading/adventure games I have ever come across, The Software Refinery's highly underrated Hardwar is arguably the truest spiritual successor to Ian Bell/David Braben's Elite. A lengthy but comprehensive review at PVR-net says it all:

"Hardwar is to Elite what Motorhead is to Chequered Flag. Where games such as I-War have a combat and tightly mission-oriented structure, Hardwar goes back to its roots to provide the player with a completely open environment. When starting a new game, you can choose which sort of career you may puruse -- trader, scavenger or agressor. You are then given a suitably equipped craft and $10,000. There are several different craft, or "Moths" in Hardwar, each with different qualities and capacities. The Silver-Y, your first craft comes equipped suited to your chosen career. For example, an agressor's craft will be fitted with more weapons and flares/chaff than, say that of a trader who will be more concerned with carrying cargo and docking with trade centres.

The Hardwar Universe is based in a network of interlinked craters on Titan and has a full day/night cycle. This affects your piloting as all craft are solar powered and you will need to keep your cells charged. However, more efficient cells and power management software may be fitted to your craft -- for a price. The power drain on your craft increases the more functions you perform. For example, running at night with (the most useful) infra-red HUD turned on and lasers blazing will see you headed for the nearest Light Well in a very short space of time. But as you upgrade your hardware and become a more proficient pilot, power for normal flight becomes less of a concern.

As you become more immersed in the game, you become aware of the different Factions and their territories as well as the different independent buildings and services available in each area. It's not long before you are able to navigate without having to look at your map and can locate the building you require by landmarks and compass bearings. You will learn that certain areas can be quite dangerous, especially at night if carrying cargo. CPU pilots will pursue those carrying valuable cargo, especially if they're flying a lower-class, or weak Moth. You are also free to do the same, however, and can target others to find out their shield strength and current cargo. Destroying their Moth will leave scrap metal and cargo which can be sold for a quick profit. Saying this, the police do not look kindly on those who kill innocent traders. You may find yourself appearing on their wanted list and subsequently becoming a target for bounty hunters.

Despite its initially bland appearance, Hardwar is actually very atmospheric, especially at nightfall/sunrise as subdued light causes the planet's fog to change colour. The whole industrial feel is heightened by sound effects and the excellent sound track. Music for Hardwar is taken from one of the UK's premier techno labels, Warp Records (Black Dog, LFO, AUTCHRE etc.) and you can even pay an in-game visit to "The After Dark", home of "the Orbit" (one of the UK's top techno nights near Leeds, Yorkshire). However, the music is by no means heavy, banging techno. The tracks chosen are much more industrial and ambient in their sound and provide Hardwar with excellent atmosphere. My only complaint would be that the music stops when you dock with a building and occasionally you end up back at the start of the last track on exit. CD music can be disabled or turned down for those who just want the ambient sound effects.

When playing Hardwar I kept getting flashbacks to pre-pubescent Elite trips. That feeling when you've just set up a cool trade route that is going to skim you enough profit to get that new Moth you've got your eye on down at "Downtown Moths"... the adrenaline buzz when you kill that Wanted pilot and scavenge his cargo... the fear when you're targetted by other scavengers and you've only got enough power to make it to the Light Well, let alone defend yourself. In many respects, Hardwar is as much a Role Playing Game as it is a space combat and trading sim. You are literally guiding your character through his/her life on Titan and have to make key decisions which will shape and either make or break your chances of survival.

With e-mail messages arriving at your personal in-game account, you're fed information on wanted pilots, required materials, even rumours on local News (courtesy of HardWarp FM, Hardwar's own radio station). Additionally, you can visit any trade center to obtain a database of goods wanted and for sale. This allows you to make wise trading decisions and obtain the highest profit margin by searching for bargains and desperate buyers. As in Elite, you can trade standard goods such as food, water and machine parts for low profit.. or go for narcotics, gems and weapons to try and get rich quick.

Personally I think Hardwar is a great game. But I wouldn't recommend it for everyone. Due to its more simplistic flight model, it's much more accessible than I-War.. but at the same time it's still not a "pick up and blast" game. Hardwar is not just a high-action 3D space combat title, there is much much more to it. As a result, it has massive longevity and replayability. The idea of a late 90's Elite is nice, but Hardwar has expanded on it in several key areas. Firstly, the Police aren't necessarily the highest authority. The Factions in Hardwar are massively powerful and no doubt become more so as the game progresses; The ability to purchase your own buildings and multiple craft really adds to the role-playing side of things; Trading is aided by a more complex, area-specific database for sales and needs; You can get out of your Moth to take taxis or the Monorail around Titan; Multiplayer gaming becomes a much more interesting experience; It doesn't have a Lens-Lok and there aren't any Thargoids. In summary, this is one of the year's best titles and if you've not currently got a space combat/trading game, this will fill that gap perfectly. If on the other hand, you're an Elite-freak and just really enjoy this sort of game.. go and [get it] now! This is by far the best game of its type since the original Elite and beats all pseudo-clones and Elite- successors (Frontier etc.) into the ground." 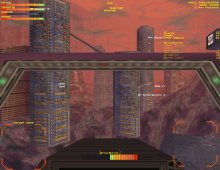