One of the most overlooked space simulations, Terminus is a great - and very realistic - futuristic space simulation from Vicarious Visions that strives to be the next generation of Elite - and mostly succeeds despite some technical flaws. David Hunt's excellent review for cdmag.com says it all:

"Terminus is set approximately two centuries in the future. After the discovery of alien artifacts on the Jovian moon Callisto, human technology took a giant leap forward and a new metropolis of space stations was born. That's well and good, but you wouldn't have much of a game if something horrible didn't happen, right? As a lowly pilot, you know nothing of the events of the past. The only thing you do know is that you must decide where your allegiance lies-with the United Earth League (UEL), the Mars Consortium, the Marauder Pirates, or yourself (as a mercenary). Relations between the three main factions are strained at best, and the emergence of a fourth group only serves to spark the volatile situation. Although the UEL is officially in control of just about everything, a discontented Mars Consortium seeks to separate itself from the UEL. Of course, the Marauders take the opportunity to increase their raids on shipping lanes.

Whatever side you choose, the plot is laced with politics, and news reports and conversations with the few characters you meet will inform you of any progress. The story itself is interesting but somewhat short of spectacular-expect your standard escalating conflict scenario. Some aspects of the story are actually quite poor, such as a final resolution that seems to come out of nowhere and which does not really involve your character. Despite this, Terminus takes a step ahead of its competitors in allowing a more dynamic plot progression. This game is no Wing Commander - it does not require that you win every mission. In fact, it's entirely possible to get yourself blown to bits on a regular basis as long as you don't allow your reputation to sink too low. It's a breath of fresh air for players who are tired of getting stuck on a difficult mission and eventually giving up on a game.

Although all four career paths are playable, enlisting in the military (either with the UEL or with the Mars Consortium) is a choice that you will ultimately regret. Two of the more interesting motivations for playing the game are nullified when you join the service-you don't get paid, and you don't get to choose your ships. All four of the careers follow the same mission structure, which consists of a selection of random (non-story-related) missions interspersed with scripted story missions. Every so often a new mission will become available and you have thirty seconds to respond. Between plot events you can fly an assortment of generic, randomly generated missions such as strikes, patrols, spy sorties and the like. As it turns out, this system makes Terminus a great game? when you choose to play as a pirate or mercenary.... since they get to buy their own ships and components. Although these career tracks are intended for experienced players, they are also the only two story modes worth playing. In these careers you get paid for completing generic missions ("contracts"), which also tend to be far more eventful than military missions. Contracts vary in pay from a few thousand to a few hundred thousand, depending on their demands. Spy and hijacking contracts tend to be especially valuable. As you could expect, you start off flying a virtual tugboat, capable of neither combat nor trade, with a handful of cash. You can either use your grubstake to upgrade your current ship, or you could save it to help pay for your next vessel. Either way, this is where Terminus really shines - getting money, buying new things and designing your ship.

All it takes is a single look through the ship manager to realize that this game is incredibly deep in a mechanical sense. Ship hulls are divided into a variety of bays. Some are specifically designed for weapons, others for propulsion, and so on. Unless you want to purchase a pre-configured ship, you have to start with an empty hull and outfit your ship from the get-go. There are a total of thirteen basic components: computers, scanners, detail scanners, devices, engines, thrusters, fuel systems (and fuel pumps), energy systems, weapons, surge cells, cargo, ammo (unlike most space sims, every weapon requires ammo) and armor. Additionally, there are dozens of peripheral components available for most slots. It's entirely possible to get wrapped up in building a ship and spend an hour tinkering with the design, adjusting and tweaking to get everything just right.

Newtonian physics are nonexistent in most space games; Terminus is one of the few exceptions. If you spend ten seconds accelerating to reach a certain velocity, for example, you must allow yourself another ten seconds to come to a stop. Fuel can become a consideration in particularly long missions, and each time you trigger a thruster a small amount is consumed. In these cases, you will learn to ration out your fuel and spend most of your time coasting, saving thrust for combat maneuvers. Inertial compensators are fitted on every ship to help you cope with the complex physics model. Basically, these components help ships fly in the direction they are facing by automatically applying the lateral thrusters.

When everything is said and done, Terminus comes out looking-and feeling-good. While the detailed ship design and physics model won't appeal to everyone, the ability to purchase ships and dumb-down the physics give the game more widespread appeal. For those of you who are interested in the meat of Terminus, there's only one thing to say-ignore the military campaigns and dive right into the good stuff? you'll have a ball." 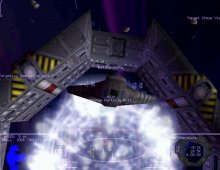