Xenocracy is an excellent but much overlooked space simulation, probably due to the combination of inadequate marketing (publisher Grolier Interactive has always focused more on touting their line of reference/educational CD-ROMs) and the huge number of higher profile space sims in that year (1998) that clamored for a share of armchair commander's wallet - Descent - Freespace, X-COM: Interceptor, and Independence War were all released during that year. Although Xenocracy is neither as epic in scope nor as good looking as Independence War, it is still an excellent space sim that deserves much more attention than MicroProse's overhyped and inferior X-COM: Interceptor.

While it won't win any Academy Award, the game's plot is quite intricate for a space combat sim. In the far future, four super-powers of the Solar System - Earth, Mars, Mercury and Venus - are poised on the brink of war. As part of the UPN peace-keeping force, you have to take on combat missions against these four planets when they transgress the boundaries of international agreement. In addition to the planets' ships, sometimes you have to contend with other, less savoury enemies including space pirates and far worse enemies.

The gameplay is similar to Wing Commander, with a good degree of freedom. You choose which missions to accept, and which to reject, but your choice can have far-reaching consequences later on in the game. For example, if you are too zealous in one mission, you may actually start the war that you were supposed to prevent. If you don't want to think about consequences and instead just focus on the action, you can switch from 'simulation' to 'arcade' mode. Another great feature is that combat can take place either in space, or on the surface of planets. Planetside scenery is almost always very nice to look at, although it would have been great to be able to penetrate the atmosphere and visit the cities below a la Frontier. Spaceflight physics are reasonably realistic - as should be expected from Simis, the studio that developed a number of excellent flight sims including the venerable Flight Sim Toolkit.

Although it certainly is no match against today's jaw-dropping 3D-accelerated games, Xenocracy still looks beautiful. The ships are very well-designed: I like how they look very "organic," as opposed to clunky flying metallic boxes common in most space sims. The game does take advantage of your 3D card, but kudos must be given to the designers for taking the time to optimize the game for low-end (P133) computers.

With a good range of weapons, smooth gameplay, and a sprawling and detailed "space opera" plot, Xenocracy is a lot of fun. The game also comes complete with excellent multiplayer support (serial, LAN, and TCP/IP) for up to 8 players. If you are looking for the next Indepedence War, this is not it. However, if you are looking for a fun space sim with a strong focus on plot that is deeper than it first appears, Xenocracy fits the bill. It may not be original, but it works. Highly recommended. 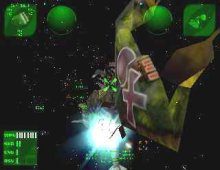