Starflight is surely one of the alltime classics of the computer-gaming-history. It set standards, without any doubt! Mankind left the Earth long ago and it's home is now Arth. You set out with your crew on a mission similar to the legendary 5-year-mission the Enterprise (yes... the one from TV ;) ) set out for - search for life, make contact, go where no man has gone before. Mankind just now rediscovered the necessary technology for hyperspace-travelling that got lost during a big war. You are one of the pioneers setting out like some others commanding an Explorer-Ship. Training your crew RPG-like, meeting aliens and trying to get new informations from them - it's important to have a good communications-officer! - you will find many elements that make you feel just like Captain Kirk himself. I played this game on my Amiga for hours and hours. There's always something new to find. You can even visit the long forgotten Earth. But beware to do only sightseeing - there's something going on in the universe. Some starsystems are exploding without any visible reason. This can also happen just when you enter the system, so always keep a backup-copy of your saved game (Starflight has the weird behaviour of screwing saved games up when you don't end the game on a way it offers you - reset is NO good!).

One of a handful of games that spawned a whole new genre, Starflight is arguably THE best space adventure game ever made.

Despite the (initially) lackluster plot (gather a crew and equip a ship to explore the unknown galaxy-- in true Star Trek fashion), Starflight introduces numerous features that set new standards for subsequent space epics (such as the better known and better sold Star Control 2): real-time play, awe-inspiring hundreds of galaxies (each with several planets), and many alien races (each with its unique language and culture). Although the game has an overarching plot (involving a sinister scheme you must expose), the sheer number of things you can do and star systems you can explore makes it incredibly open-ended. You can barter with alien races, mine planets for artifacts, improve skills of your crew, survive frantic space combats, and marvel at fractal surfaces that make each planet seem unique (watching your craft land gently on a planet is one of the most memorable moments of my entire gaming career). The scope of the game, and the elegance with which it is conveyed, makes Starflight the closest computer games ever come to what an actual space exploration must feel like.

Every facet of the game, from the great gameplay, user interface, and graphics, is so polished that what little flaws there are (such as the fact that artifacts are a bit difficult to figure out) aren't even worth mentioning. Last but not least, the ending sequence is one of the most impressive and appropriate I've ever seen in a game. From the start to finish, Starflight is one very well designed, well polished, and incredibly addictive game you'll play over and over again just to appreciate the amount of man-hours and love Binary Systems had put into the game. Starflight is that rare game that truly stands the test of time, and still attracts a large following more than a decade after its initial release. If you want to play only ONE space adventure ever, this is it.

Note: True Spaceflight fans should check out its sequel, as well as Protostar -- the true Starflight 3 that wasn't allowed to use the name. The download below contains the game, as well as various fan-made utilities (such as VGA patch) that will greatly enhance your Starflight experience. The manual download contains both PDF manual and starmap. Enjoy :)

Starflight is an almost perfect mix of space adventure, strategy and RPG. In this game you play the crew (yes the WHOLE crew) of a starship on voyage of discovery - in fact the game is a big rip off of the whole "Boldly go where no man has gone before" thing from Star Trek, except that in this game much of your exploring involves finding the funds needed to upgrade your ship and train your crew. These are acquired by landing on a planets surface and collecting as many precious metals/materials as you can find, then selling them on at the starbase trade depot. Later you get caught up in an incredibly interesting storyline (more interesting than mining planets anyway), but I don't want to mention too much about that. One of the joys of this game is discovering things for yourself, and i want you to get as much out of it as I have.

The other thing in this games favour is the wide variety of Alien races you will meet - some friendly, some wanting to blast your ship into a million different sparkly bits. When you encounter aliens you will be taken to the ships communication screen. What happens next is dependent on how well trained your comms officer is. A highly trained officer will be able to translate alien speech into perfect English - if you have a poorly trained officer then you could be left with nothing more than a series of grunts and clicks. Depending on how well you do when communicating with aliens you may receive useful information or better, or you could end up having to fight for your life.

This is as close to a perfect game as I have ever found, and if you like your games deep and long lasting then I HIGHLY recommend you download it. 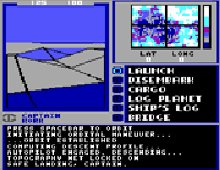