One of the most wanted games of 1991, made by Coktel vision that was later purchased by a game giant - Sierra. I think this fact proves the quality of the company and it's games. Goblins is rather unusual action/adventure. You will get to control three goblins, sent by their king to find the source of his pain (if I do remember right...it's been 8 years since I played it). In order to progress in the game You will have to complete certain tasks in just about every room (screen) You enter. Have fun...

Sweet! This one is one of a kind adventure game. It is very funny and enjoyable and it is also the first in the Gobli(ii)ns triology. The Goblins series is another suceesfuly series published by Sierra.

The game is an adventure-based game, but it's built by lots of screens/puzzles. Each contain a small quest which you finish only with items you find on the same screen, that makes each screen to a small puzzle.

As for the background, you play 3 silly little goblins - a warrior, a magician, and a one... who use thing :) To achive things you must combine the abilities of the three, and use them in funny orders (tip: try to think like a stupid little creature if you are stuck), these silly goblins will do things that will make you fall of the chair. The graphics are good, the sound is ok, but the gameplay is just one of the best i ever seen.

Truly one of the greatest games ever! The King of the Goblins is tortured via a voodoo-doll. He sends his best men, three goblins each with it's own ability, to end this. So you're now out with your three cute little fellas. One is able to use the things you'll find on your way (you can carry only one at a time), the second one is more the warrior-type - his ability is to hit (and he hits ev'rything you tell him!), number three in your team is the magician. His magic works different on each thing, you let him perform it on. The key to success is good teamwork between the three. Gobliiins is an Adventure/Puzzle-Crossover. You got to reach one special goal in each of the screens, but that doesn't mean, they're not related.

Often the reason, why you've got to do something in one screen shows up one or two screens later. It may not seem so everytimes, but in general every puzzle is logical and just dependent on using everything you find plus the abilities of your goblins. Very good game for anyone, who likes a funny one that makes you think. It has been kind of legendary back then and it still should be now! One of the best games on my site - definitely a MUST-CHECKOUT!

Arguably the best Coktel game ever made, lead three wacky goblins on a madcap adventure to restore sanity to the King. The game features wacky but ingenious puzzles, all of which require well-timed co-ordination among the three goblins, each of whom has different abilities that must be carefully exploited. Although the game was billed as an "adventure," it should be more appropriately labelled as a "puzzle adventure" due to the intensity and sheer number of puzzles that overshadow the plot. Gameplay is even structured like a puzzle game: each screen is self-contained, i.e. all items you can get, except special quest items, are only used in the present scene. One of the best things about the game is that you are free to try a wide range of actions; when you use the items inappropriately, the game shows you the results (usually funny) even though it's the wrong action. This is a far cry from boring "sorry, you can't do that" response in most games, and helps make the game a lot more playable and fun.

The game gives you a password for later play after you finish each scene, and there are dozens of them to go through, each more difficult than the rest. With great graphics, wacky but logical puzzles and cast of characters, and charming sense of humor, Gobliiins is a must-have. Just beware that you WILL get frustrated several times in this one ;)

The king of the Gobliiins has gone crazy and three heroes have been selected to find a cure for the king. Each of them has a special abilty: the engineer can use any item he finds, the magician can change objects and the warrior can fight and climb. You have to combine each of their talents to complete their quest.

Each level consists of only one screen but don't think the game is easy, you'll have to solve all kinds of puzzles to complete one level and there are 22 in total. Some of the puzzles are quite obscure and it will become a trial and error affair. Often though by using the different abilities you can progress at a fairly good pace. Many things you can do won't help you at all but they are fun to watch. Keep an eye on the health bar at the bottom of the screen because if you fool around too much you will have to start the level again. You never gain health so if you run low on health it's best to load the level you are on by using the password you get once you finish a level, this way you begin the level with full health again.

The grapics are good and detailed and though the characters are small the animations are very nice as well. Too bad there is no music to add to the atmosphere of the game, there are some basic sounds effects but nothing really special. You'll have fun playing the game and if you happen to finish it and want more then you'll be pleased to know that there are two sequels to the game. Overall a very good puzzle game despite the fact that it can be a bit frustrating at times. 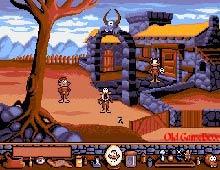 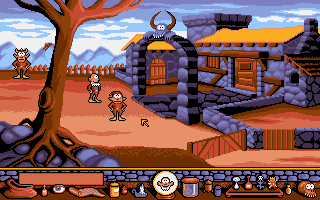