Goblins are back! This time Blount is on a mission of rescue. Wynnona was taken hostage by King Bodd, and it's up to our little here to save her. Still the same - complete certain tasks and continue onto next screen...

The third game of the Goblins triology, once again - one less 'i', which means you play only 1 goblin. Personally I didn't like this one, and I was very dissapointed. It is extremely hard and even annoying, you have tons on nonsence puzzles that will take ages to solve. If the gobliiins 1 and gobliins 2 were easy for you (which I can hardly believe) you might try this one. The graphics and sound are not much improved of Gobliins 2, actually I prefer the graphics of the second game.

Anyway this game is also funny when you finally succeed doing something. This game is a shame of the name he hold, but it's an 'ok' game anyway :)

Not a new idea this time - not unique, but still good. I got asked about this one - so I hurried to bring it up. Yeah, graphics improved a little. Blount is on his way to find King Bodd and Queen Xina. Hard Quest but with YOUR help he'll sure make it! The thing I always liked most 'bout the Gobliiins-Series was the that Teamwork was so important. Of course this time it isn't - Blount is all alone... Hmm, more like a "real" Adventure this time - you may notice Sierra's influence, they also changed the name to Goblin's Quest. But never mind - it IS a good game!

The last game in Coktel's puzzle adventure series is a very disappointing title that's not worthy of the name. As the title suggests, you control only one goblin this time around since there is only one "i" in the title. The absence of co-ordination puzzles is made up by the sheer amount of puzzles and increased difficulty-- so much so that the game is near impossible to solve without hints or a lot of patience.

What makes the game very frustrating is a number of puzzles that you simply cannot solve without a lot of trial-and-error. For instance, in the second scene you must get through several bad guys. The only way to do that is to randomly try each item you have on each guy until one works-- each guy needs one particular item, but there is no way to deduce which one. No clue whatsover. If you're a masochist, have a lot of free time on your hands, or want to burn your brain cells at a faster rate, then Goblins 3 might be for you. The rest of us are advised to stay away and play the first 2 games in the series instead.

I found this game to be quite involving. Although it was basically the same as its predecessors it did have its finer points. I do not like the fact that you can control only one goblin at a time, but it still makes for good play.

There are parts of the game that I found to be quite confusing as if there were no set way to know what to do next. For example there is a point in the game when you must kill a number of bad guys. However each bad guy must be killed by a particular item that you are carrying. The tricky part of it is actually to know which item kills each guy. I found that there was no way to know for sure which item was the right one, except by trial and error, I juts had to try each and every weapon on the first few until I finally discovered which of them was the correct murder weapon.

Although it was entertaining and somewhat a good game I would only give it 2 stars out of five. It wasn't very original. I would much rather stick with the 1st two and play them over and over again then to have to play this one more time.

The game really doesn't leave much to say except that it left much to be desired. The graphics instead of being better which one comes to expect from a newer game were actually of less caliber than the second.

Not only were the graphics not as good, but the storyline seemed to be lacking as well. Tasks that needed to be completed were hard and most times annoying. However not being able to die was something that really kept me going and the sometimes witty humor got a few chuckles out of me.

I also found that this is the type of game that you realize things later on that would have helped you in the beginning. Such as a piece of garbage that looks useless could actually help you move on in the game, or even something as small as a coin could actually be a turning piece in the puzzle.

The snake and the midget were definitely my favorite characters. Airships don't really seem like a goblin type of vehicle, but it served well for the purpose and Blount sure does seem to enjoy the ride. It's not something I would call a must have, but it's a pretty good game! 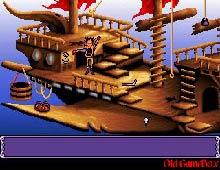 People who downloaded this game have also downloaded:
Gobliins 2, Gobliiins, Ecco the Dolphin, Legend of Kyrandia, The: Hand of Fate, Dark Earth