Legend of Kyrandia, The: Hand of Fate

The Legend of Kyrandia: The Hand of Fate is one of the long line of graphic adventure games created by Westwood Studios and published by Virgin Games Interactive. It was released in the early nineties for play on the personal computer and is entirely in the third person perspective. It offers a fun medieval theme that follows its predecessors fairly closely.

Kyrandia is disappearing. Yes, the land is disappearing, little bits at a time. While the Court Mystics don't have a clue on how to handle this unusual phenomenon, the Hand recommends that they elect someone to travel to the center of the land to retrieve the magical anchor stone that can hopefully stop the theft of the land. The tomboyish young Zanthia is chosen as the most likely candidate for the job, and becomes one of the few female protagonists in adventure gaming history, keeping company with Rosella from the King's Quest series, and Doralice, the ditzy protagonist of Lost in Time.

Zanthia has her work cut out for her. She begins with an act of vandalism in her rooms, forcing her to walk to the center of the world instead of creating a magical portal with the items she had previously acquired. It does not take Zanthia long to realize that there are bigger things at work here, and the anchor stone may well not be the answer.

The Legend of Kyrandia: The Hand of Fate is a point and click adventure game with an amazingly large inventory and a rather strong and long story line. It proves some anomalies from the previous games and does a good job of setting up the following games, as well. The Hand turns into a large question mark, and Marco does as well, for those who are familiar with the series. No spoilers here.

The user interface is easy enough. There is a shelf running along the bottom of the screen where Zanthia is able to place her inventory of items she acquires. One of the premier things she must locate, or re-locate, is the book of spells that was stolen from her home by the vandals at the very beginning. It has been torn to pieces, but at least a few spells still remain. Much of the game involves locating spells or ingredients needed to make spells work. Bear in mind that Zanthia was only able to recover part of her spell book, and only spells that begin with the letter S will work.

In total, this is a very nice adventure game and a solid sequel in the series. It is a fairly large game and will require a while to complete. It is a solid and satisfying play that will leave the user ready and waiting for a sequel. 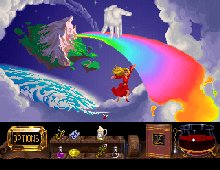 Legend of Kyrandia, The: Hand of Fate screenshot