Poor prince Alexander is in love with Cassima, a beautiful princess of Green Isles. She invited him for a visit at the end of King's Quest 5, but the problem is - he doesn't know where her land is! Seems like a job for The Magic Mirror (hehe)! He sees Cassima and decides to find her by navigating by the stars he saw in the mirror image. Soon, he arrives to Green Isles only to find that princess is in deep trouble!

Back when it was made, King's Quest 6 was considered as to be the biggest adventure game ever made. Of course, by today's standards it no longer fits there, but it still is a great game. The graphics and sound are beautiful and so it the complete story and characters. Get this game, you will not regret it.

During King's Quest V King Graham rescued his family from the evil wizard Mordack and in doing so he also freed a beautiful enslaved girl, Princess Cassima from the land of the Green Isles. Back in Daventry, Prince Alexander hasn't been able to forget about her. He is eager to visit her as promised, but the problem is nobody has ever heard of the Land of The Green Isles. One day, Alexander sees the troubled image of Cassima calling his name in the magic mirror and he also gets a glimp of the stars outside her window. Inmediately he announces his plans to depart to the Green Isles and sets sail navigating by the stars. Unfortunately, his ship is caught in a storm and wrecks near the coast. Alexander wakes alone lying on the shore of an unknown land with a lot of questions burning in his head. He is determined to help Cassima, wherever she is, and so your adventure begins...

While KQV set a new standard in adventure games featuring beautiful hand-painted backgrounds and a new point-and-click interface, King's Quest VI perfected the style. It features an introductory movie and cutscenes with live-capture actors for added realism, and graphics were top notch for its time. One of the things I really liked about this game is the complex storyline which allowed alternate ways to progress during the game providing a less linear game play and multiple endings. Like every prevoious King's Quest, this one has characters and puzzles that make reference to popular stories and fairy tales (e.g. Beauty and the Beast, Alice in Wonderland). Almost every location is unique and memorable, from the wacky Isle of Wonders to the creepy Realm of the Dead. The majority of the puzzles are not excessively tough and have a logical answer to them (at least it seems logical once you get to solve them!) but sometimes you just have to try using every inventory item to see if something happens. The Cliffs of Logic can be tricky (I rememember being frustrated for days the first time I played the game), and by the way, you'll need the manual to solve them. It is advised to save often since there's a few places where you can end up dying or even irremediably stuck if you do not carry the right items with you (e.g. inside the catacombs and the castle). However, you can finish the game solving only half of the puzzles but you get the bad ending. The real challenge is to take the long path and get the good ending.

Concluding, this game is, in my opinion, one of the bests installments (if not the best) in the series. It has nice graphics, a good storyline, entertaining game play and good replay value because of the alternate puzzles and the multiple endings. Great soundtrack too! What are you waiting for... Download it now! 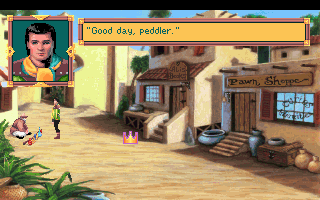