Jessie Bains is dead and Sonny and Marie can live in peace again. Sonny has been promoted, they got married and everything seems to be fine. Then Marie gets shot and is in a critical condition. Who's behind this?

The introduction of the point&click interface to Police Quest series. This means easier game play but for some reason the game is quite unstable and likely to crash every once in a while. PQ3 is the most complex in the series and has the best story so far. A true masterpiece.

I still remember playing Police Quest 3 on my 386 computer. I'm not really a fan of these type of games but I still enjoyed it. Back in those days Sierra had some great titles.

Anyway on with the review. Police Quest was released in 1991 by Sierra Entertainment. It was a pretty similar game play as the Leisure Suit Larry series which was a pretty good game as well. Even though I believe the story line is a little bit boring, both the graphics and characters of the game make it worth while playing the game.

It is pretty hard at the start of Police Quest 3 which is why I'm not really a fan of the puzzle type games genre. I mean you could really only do so much at the beginning of Police Quest 3 before it gets boring, but after downloading the walkthrough everything actually mad sense. Driving around in Police Quest 3 was also a bit difficult at first but once but you soon get the hang of it.

Did I also mention that the soundtrack to the game isn't that bad. I believe Jan Hammer actually wrote the music for the game, who was also the composer to the popular Miami Vice theme, which leads me to believe that Sierra was trying for a Miami Vice type game.

Overall, I think this is the best of all the Police Quest series. Even though there a few problems I still enjoyed it and it is definitely worth looking at. Dare I say it you need DOSBox to play this game. I'm hoping one day they re-vamp the series and make a Police Quest 4. With technology nowadays the possibilities for a storyline and gameplay is endless. 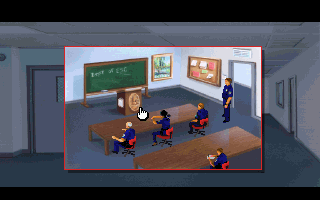