Graham is back! After a short pause of two games, the good old King of Daventry is ready for some serious adventures. In the last game Rosella managed to help her dying father and everything was back to normal after a long time. During one beautiful day, Graham left for a walk and when he got back… The castle of Daventry was gone! On its place was just one huge hole. What happened? An evil wizard Mordock released a magical storm and took away the castle. Now Graham is in search and rescue mission for his family.

King's Quest 5 is the first Sierra game that used an icon system instead of typing the commands. It is also the first one to use 256 colors. Speaking of graphics I must say it's great just as the sound is. A great game for all adventure game lovers.

In King's Quest 5 we have the return of King Graham on the spotlight as a much older man. After rescuing his wife-to-be in King's Quest 2, King Graham didn't have any more adventures. Instead his children were the main characters of King's Quest 3 and 4. As King's Quest 5 opens, Graham is taking a walk alone. When he returns, he finds his castle missing. There he meets a strange talking owl, named Cedrick, which tells him that his castle and family have been abducted by a wizard named Mordack. The owl and Graham, using a magic dust given by Cedrick's owner, fly to a far-away land in pursuit of this wizard.

As King's Quest 1 was the first animated graphic adventure, King's Quest 5 is the first 256-color adventure and the first adventure by Sierra using a new UI consisting of icons (walk, see, use etc) that later became common to all the classic adventure games by Sierra. The interface is very simple. You click on an action-icon from an icon-bar that appears on top of the screen when you move your mouse there (or your right click through the actions). It's a typical adventure game, but one, which excels in beautiful background art, and interesting locations. Indeed you will travel through forests (dark and light alike), a desert, a cold mountain and by the sea to find Graham's family. This game was voted the adventure game of the year (1990) by some groups and was also the first Sierra adventure to have a CD-ROM version, where speech was included.

This is a classic adventure game that pioneered the adventure game genre, much like its ancestor King's Quest 1. No more 16-color artwork and text parsers. Here Sierra follows LucasArts in making a fully point-and-click adventure game, but using the concept of icons instead of text-verbs. As a King's Quest game, it's the last game of the series featuring King Graham as the main character and provides the foundation for the better King's Quest 6. 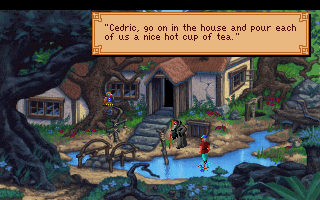