The story in the game is quite short and it only contains one page of text, making it very short. You start as Sir Graham, just outside the castle and when you met King Edward, he tells you that you must go on a quest, because King Edward is dying and if you manage to complete this quest you will inherit the throne and also because your kingdom is weak and poor and if you get these 3 things, your kingdom will become strong and wealthy. You have to get a magic mirror which can tell the future, a magic shield which protects the bearer from any mortal harm and a magic treasure chest that is always filled with gold coins. There isn't much more of a story in this game. A part the makers could have spent a lot more time on.

The graphics are like the regular Sierra game graphics at that time (like in Space Quest 1, Leisure suit Larry 1 and Police Quest 1). The graphics isn't that bad even though they dent to interfere with the game play. The game play was okay, with some nice puzzles, but like in so many Sierra games, it can become quite annoying. You can die and if you die and haven't saved for a long time and die, you have to go back to the old save and do all the things you just done all over. This can be very annoying. Also there are things that try and kill you if you enter the map where they are, and there the witch is by far most annoying.She got me probably a dozen times. I also noticed that if you enter another screen and there is a tree where you entered, you will get stuck in the tree and that is quite annoying.

There isn't much sound in the game, some music when you die and when you accomplish great achievements. There isn't much more sound or music in it. This game could have been far worse than this but also a lot better. There wasn't really a story and you had to figure out most times what to do on yourself and there wasn't a real story that helped you do it. The game play was sometimes annoying, but not at all as annoying as in games like Space Quest 1, and it was a lot easier to avoid dying. This is a great classic though and you should get it.

This is the first King's Quest game by Sierra. A nice adventure where you have to type your way through it. In short the gameline. The King of Daventry is old and about to die soon. Unfortunately he has no heir to carry on the royal line. Three treasure are lost in the kingdom and Sir Graham (that's you) must find those treasures in order to become King.

King's Quest is an adventure game series created by the American personal computer game company Sierra Entertainment. It is widely considered as a classic series from the golden era of adventure games. Following the success of its first installment, the series was primarily responsible for building the reputation of Sierra. Roberta Williams, co-founder and former co-owner of Sierra, designed all of the King's Quest games. The King's Quest series chronicles the saga of the royal family of the Kingdom of Daventry through their various trials and adventures. The story takes place over two generations and across many lands, including Daventry, Kolyma, Llewdor, Tamir, Serenia, Eldritch, Etheria, Land of the Green Isles, Realm of the Dead, The Swamp, Dimension of Death, Underground Realm of the Gnomes, Barren Region, Frozen Reaches, Paradise Lost, and Realm of the Sun. In February 2011, it was announced that the series will be rebooted by Telltale Games. Description The world of King's Quest is sophisticated and immersive. It encompasses many different kingdoms … 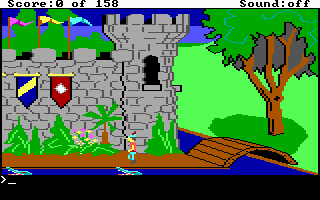