King's Quest 4: The Perils of Rosella

During King's Quest 3 we were introduced to two new characters: prince Alexander and princess Rosella. Alexander finally reunited with his family and saved his sister from the dragon, but not everything is right. King Graham has just had a heart attack and is nearing death. Rosella is desperate and soon learns about Genesta, a beautiful fairy that lives in a far away country of Tamir. She says that she can help Graham but she needs Rosella's help first. And the adventure begins.

This is the first KQ game that was not made in AGI. The graphics are improved and for the first time there is support for sound cards. It is still a textual adventure so you have to type your commands. Overall, Perils of Rosella is a great adventure game with good story and an average difficulty.

In this KQ you play for once a girl? A girl??? Yep, you play Rosella, daugher of King Graham. Your father has collapsed by a magical desease and you go on a quest to help your father. This sequel-sequel-sequel game can finally be played with the mouse. And has stunning sounds and stuff. Graphics are pretty good for those days.

The story of King's Quest IV: The Perils of Rosella features Rosella, the princess daughter of King Graham and Queen Valanice. All of the perils Rosella will face will transpire over a twenty-four hour period, making this the only real timed version of the King's Quest games. Since the game is over a full day, some of the puzzles the user will complete will have to be done in daylight, and others will have to be completed at night. The timing of the game is of the essence, since King Graham has suffered a heart attack. With the assistance of the good fairy Genesta, Rosella is transported to the magical land of Tamir in order to find the fabled fruit that will save her father's life.

Unfortunately, Genesta has problems of her own. The evil fairy Lolotte has taken the magical talisman that supplies Genesta with her powers. If Princess Rosella cannot find the fruit, her father will die. If she cannot recover Genesta's magical talisman, Genesta will be powerless and will die, and Princess Rosella will not be able to return to Daventry to save her father. Princess Rosella has no choice but to go to work for the evil fairy, performing three tasks in exchange for the opportunity to recover the talisman. It is possible to recover the talisman, but not find the fruit. Then Princess Rosella can save herself, but not her father. This leads to some degree of nonlinear plot, since there are alternate endings depending on the user's actions.

Kings Quest IV stands as a very standard point and click adventure game with some offbeat puzzles and activities. Mostly, the puzzles are logical and the user usually has a pretty good idea of what inventory will be required to solve the puzzles and advance the plot. The crucial difference between KQ4 and the others in this series is the pressure of having a time limit, nicely disguised as the need to save Graham. While the graphics show the date of this game, it still holds admirable merit as a true adventure classic. 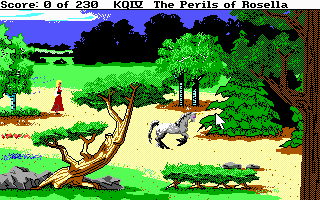