For the first time in the series, Graham is not the main character of the game. This time it's Gwydion, a young apprentice of an evil wizard Mannaman. Your goal is….simple, heh. You have to escape Mannaman's mansion and go back to your land. Not an easy task if you ask me!

This game is considered by many as the best King's Quest ever made. The story, the difficulty level and characters are great even though the game still uses the old Sierra AGI engine (this was the last KQ game made in AGI). You still have to type the commands, but isn't that the real joy of those games? A true masterpiece by Roberta Williams!

The third part of the KQ series. This time you're not Graham whatsoever; you play Gwydion a nice fellow who works for an evil wizard Manannan. You do not want to live as his slave anymore and want a life of your own. One day he goes away for a while and you can walk around outside your home. Find a way to get rid of the wizard for once and all.

King's Quest is a longrunning series of adventure games that has left it's mark in the industry. In this third chapter the story revolves around an evil wizard Manannan who kidnaps a child every 17 years to work for him as a servant. Once they turn 18 he will turn them to dust so that they will not learn any magic and turn against him. You play the part of Gwydion now 17 and as long as he has known a servant of the wizard on a great quest not only to rid yourself of him once and for all but to find and fullfill your true destiny.

Gwydion is actually Alexander the son of Graham from the first two games and also the twin brother of Rosella. Snatched at birth the once peacefull Daventry has become a land threatened by a three-headed dragon. The dragon demands a sacrifies every year and this time Rosella has been chosen to be the one. Not only will you have to get rid of Manannan but afterwards you must get rid of the dragon as well.

You start the game at Manannan's mansion on top of a mountain, he will keep a close eye on you and if you walk down the mountain or pick up ingredients for use in magic he will zap you and turn you to dust ending your adventure prematurely. He will also give you chores to do and will punish you if you don't do them fast enough. After a while he will go on a trip though and you will have some freedom to do what you must, aided by a magic map with which you can travel around much faster. The main object is to first destroy Manannan with magic for which you must gather the ingredients and afterwards get to Daventry and take out the dragon, save your sister and become heir as you were meant to be.

All this is timed which is a first for the series and too be honest it doesn't really add much except annoy you. When Manannon goes on a journey you will have 25 minutes of actual time to do what you must before returning to the mansion and doing chores again until he once again goes away. Once you take out Manannan and go back to your home country the time is no longer relevant. The game looks and feels exactly like it's two prequels with it's blocky vga graphics and pc speaker sound. You can walk around using the mouse or the cursor keys but commands have to be typed in.

Personally I feel the game could have done without the timer but at least 25 minutes isn't that short so you can explore at least somewhat before returning. There's still death around every corner but regular adventure gamers should already be wellknown with this sort of thing. The game is a lot longer than the previous two so that at least is a good thing. It's a nice game and more of the same but unfortunately that's also it's weak point depending on how you look at it, for me I quite like it. 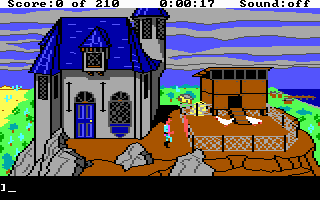