Sonny dealt with the dangerous Jessie Bains in first PQ game, but bad guys always come back. Bains is no exception and this time he's looking for revenge! He captured Sonny's fiancé and is threatening to kill her unless Sonny surrenders to him. Will that happen? Download this great game and see it for yourself.

Police Quest 2 is still a textual adventure. This makes it hard to play but it is also very interesting. I guarantee you will enjoy playing it.

Sonny Bonds, the hero of Police Quest: In Pursuit of the Death Angel, has performed a public service for the town of Lytton by putting the notorious "Death Angel" Jesse Bains behind bars. His service has won him a promotion from the Narcotics to the Homicide Division. When Sonny learns that Jesse has escaped from prison, he and his partner Keith are put on special assignment "Operation Target" to bring back the "Death Angel". This is the central theme of the second installment of the Police Quest series.

In Police Quest 2: The Vengeance, Sonny and Keith follow their fugitive all over Lytton as the notorious villain makes his escape and systematically sets out to take revenge on anyone who has helped to put him away. Jesse has always been a step ahead of the police since his jailbreak, leaving only trails of evidence behind at a mall, the Cotton Cove Park, and the Lytton Airport. At each site Sonny gathers valuable evidence by following proper police procedure and using his all-important field kit in the pursuit of his fugitive. The chase heats up the following day when Jesse' plan for revenge, including the elimination of Sonny himself, becomes clearer. A witness who has past testified against Jesse is found executed, and Marie Wilkans, Sonny's girlfriend who is also a witness in the case, is now kidnapped. Narrowly escaping from a deadly trap, Sonny and Keith track Jesse to the town of Steelton, home of the final witness. At last, a chase through the sewers of Steelton ends in a final confrontation between Sonny and Jesse, where Jesse finally gets his just deserts and Marie is freed.

The game is released in 1988. Like the original title in the series, this sequel is co-designed by ex-policeman Jim Walls. The game is written in SCI(0) (Sierra Creative Interpreter). This engine has a few enhancements beyond other games, such as King's Quest IV: The Perils of Rosella, which use a similar SCI engine. These enhancements include popup windows and close-ups of objects such as an open file drawer with removable folders. The graphical environment is pseudo 3D. The digitized musical score is in stereo.

A mouse and the arrow keys are used for movements of the game character. In some scenes the mouse is more convenient for controlling Sonny's movements, whereas in other scenes the arrow keys are superior. The actions are specified by text input, with usually 2 words such as "Open drawer" or "Climb ladder" being sufficient. There is an attempt to include a fair share of puzzles typical of adventure games, such as finding hidden objects and defusing a bomb. However, an enormous amount of gameplay rests on following complete and proper police procedures as laid out in the homicide officer's guide that is part of the game manual. The homicide officer's guide outlines in detail the standard operating procedures of a homicide detective in the Lytton Police Department that must be followed during gameplay. It includes radio procedures, shooting range procedures, police computer procedures, procedures to gather evidence, notify the coroner, conduct interviews, and procedure on analysis of evidence. Radio codes, vehicle code, and penal code are also explained in the guide to enable players understand references made in the game. As may be expected when tracking a cunning killer, Sonny often runs the risk of being gunned down if he does not take proper precautions.

Instead of playing out in episodes as in the previous title, the story in this sequel continues from start to end, making the game more than a trial that simply tests the player's understanding of a myriad of police procedures. There is a real sense of being "hot on the trail" of the villain as he runs amuck, murdering and kidnapping those unlucky enough to be on his hit list. Although not many fans may rank this game among the all-time great adventure sagas, there are some fine suspenseful touches and unexpected surprises. For example, in a particular scene, Sonny and another policeman scuba dive to locate a body underwater. The scene is rendered artistically with much visual imagination, making for a nice diversion. Similarly, Sonny's final hunt for Jesse in the sewers of Steelton makes for a welcome change of pace and provides an exciting climax to the chase, so long as you do not get too frustrated maneuvering Sonny with the mouse and arrow keys.

The ability to follow proper police procedures as laid out in the game's manual is crucial to earning game points. However, there is very little feedback in the game, meaning that the player can do a very poor job of collecting evidence and keeping headquarters briefed without knowing it until the point score is revealed at the end. The plot advances regardless of the player's actions. Having proper procedure tied more directly to the advancement of the story may provide a more satisfying gameplay, not to mention a more educational experience. Lastly, some characters in the game should be more involving. Keith is of little help. He is always sneaking off for a smoke. Sonny's boss is equally useless. He just gobbles ice cream and yaks on the phone!

Police Quest 2: The Vengeance is an ingenious blend of the melodrama of a deadly police pursuit and the details of police procedure for a criminal investigation. The game is an improvement over the previous title—not just in technology but also in complexity of its design. Although the game is still a highly simplified simulation of police work, it succeeds in giving the player some interesting insights into the professional life of a homicide detective. 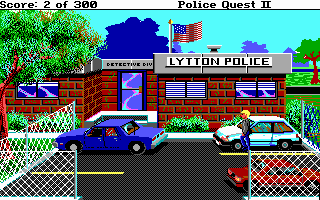