Legend of Kyrandia, The: Malcolm's Revenge

There just isn't a character much more threatening than a court jester. In the Legend of Kyrandia series, Malcolm is just that, a terribly self-centered, misunderstood court jester with a nose for trouble. Published in 1994 by Virgin Interactive, the Legend of Kyrandia Book 3: Malcolm's Revenge is a point and click adventure game featuring the continuing tales of Malcolm.

In previous installments in the series, Malcolm was cited for many wrongs and evil deeds. Entering Malcolm's Revenge, Malcolm had overthrown the crown, stolen some magical items, and turned most of the realm's important characters to stone. However, he was also falsely accused of the heinous crime of killing the king and queen, which is the one crime everyone is rightfully the most upset over. The gist of the game is to help Malcolm prove his innocence and show the irate citizens of Kyrandia that he has some mettle.

In the course of the game, the user will learn more about Malcolm's twisted past and the events leading up to his current state. The game explores his childhood traumas, and also presents many new ones. As Malcolm explores the kingdom dressed in his jester outfit, he is often reported to the authorities by citizens who believe him guilty. He will be arrested many times and will have to perform tasks and solve puzzles to escape from jail. There is also a brutal stabbing scene near the end where Malcolm has the opportunity to show his true colors.

Malcolm's Revenge leads the gamer down multiple paths and many different scenarios. There are several different endings to the game, based on the user's actions, and resulting in great replay ability. There is also ample humor to keep the gamer chuckling from start to finish. The graphic displays are great and colorful. The sound is wonderful. The interface is extremely easy to master, despite the addition of some extra features. All three modes are necessary at different points in the game. While deciding which mood to function in is tricky, selecting the mood on the screen is not. As with everything else, it is an easy, mouse-driven command.

This is a pretty good game and could provide some first rate entertainment to an adventure gamer. I highly recommend downloading this fantastic game! 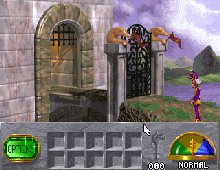