Legend of Kyrandia, The

This awesome game is the first in the Kyrandia trilogy. Kyrandia is a magic island which is a home for many creatures and magic users. in the game you role Brandon, who was chosen to save kyrandia from the evil jester Malcolm, who escaped from the prison and used his powerful magics to turn to stone the people in Kyrandia, and was accused of murdering the king. Now you must discover magics, and solve mysteries to stop Malcolm.

The game has well done graphics and good music and a very good story. If you like this game, continue playing the other parts.

Brilliant color, wonderful ambient sound and music, and a story that takes no time to get started, The Legend of Kyrandia is among those classic DOS games that you'll return to again and again.

The Court Jester, Malcolm, has fled the castle and taken control of the main source of all magical power in the land of Kyrandia. His first target is your character's grandfather, Kallak, who is also the leader of the court mystics and the only one who could contain Malcolm's newfound power. You, as Brandon, embark on the quest to restore the inhabitants and the Kingdom of Kyrandia to their previous luster even as all of nature seems to be decaying around you to amber nothing.

Over the course of the adventure, you'll of course be subjected to plenty of puzzles. I won't claim to have breezed through these... Far from it. They'll test your wit in more ways than one. Visual recognition, sound clues, path finding... More than enough variety to keep you interested over the course of the game. One piece of advice that helped me out is to have a pad of graph paper handy for the Labyrinth. You'll want to know EXACTLY where each one of those Fireberry bushes is in relation to wherever you happen to be. Trust me.

The voice acting really brings Kyrandia to life. I tried playing a version that had no voices to it, and it just lacked the same charm. It may not be up to the standards that people nowadays have come to expect with voice acting in video games, but Malcolm's cackle and Kallak's opening monologue just seem to set the pace of the entire story and well detail the battle between the noble and the psychotic.

I have to admit, however, that the ending disappointed me. Simplest puzzle in the game. I won't spoil anything for you, though, and the reward of seeing all your hard work come to fruition is more than worth the feeble final 'challenge'. 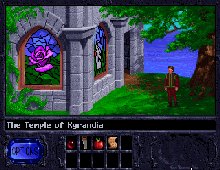 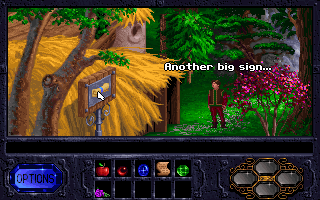 Legend of Kyrandia, The screenshots