Maniac Mansion Deluxe is a superb remake of one of the best adventure games of all time. Ron Gilbert's wacky and revolutionary masterpiece comes to life as never before in this Windows version lovingly crafted by fans: sporting improved SCUMM point-and-click interface, digitized sound effects, and gorgeous 256-color VGA graphics. Created by the same team that gave us The New Adventures of Zak McKracken, LucasFan this time did not give us a new storyline, but recreated the story and gameplay of LucasFilm's original game that is 100% faithful - everything from the characters' wisecracks, object descriptions, multiple solutions, and multiple endings are all here to delight a whole new generation of adventure gamers. If you have played the original (and if you have been playing adventure games since the 1980s but never played this one, shame on you ;)), stop reading this now and go get it - you will marvel at Ron Gilbert's ingenuity all over again. If you have never played the original, you are in for a real treat. This excellent (and deservedly gushing) review at MobyGames says it all about why a game made in 1987 remains better than most adventure games made over a decade later:

"Few games can claim to be a revolution in every aspect of it's genre, few games that is, aside from Maniac Mansion. From interface, to plotline, to graphics, to design, etc... MM managed to become the holy grail of adventure games and it's influence can still be felt to this day. [The game]'s most obvious and well-known contribution to the genre was the inclusion of it's wonderful scripting engine which formed the basis for adventure game interface's for years. No longer you had to contend with a measly text parser and the world of adventure games would change forever to become much more accessible and much easier to develop content for.

Furthermore, it is extremely interesting to note how sophisticated the game is gameplay wise considering it was one of the very first adventure games ever. Maniac Mansion sports multiple characters changeable on the fly (to a total of 13 possible combinations) each with it's distinct puzzles that lead to 4 possible endings, and each with multiple solutions to most puzzles and a completely non-linear structure that allows you to (with some exceptions) try and re-try every aspect of the game without fear of dying or screwing things up (remember that most puzzles have alternate solutions, even if you just screwed up a possible key item!). You can try the "generic Bernard and anyone else" way, or see what the Jeff-Razor combo is all about, it's up to you! Tell me what other adventure game does that?? Before or after!

Forgoing any "epic" adventuring (that somehow seems to be the only thing adventure gamers can digest) MM revolutionized adventure games in general by being itself a spoof of cheesy 80's sci-fi/horror movies. I understand how anyone can have his reservations about considering that revolutionary in any way, but that was because this was the first game (at least to my knowledge) that made full use of sarcasm and became one big spoof in itself and not just a regular game with some comedic dialogues and gags.

As I mentioned, the plot in Maniac Mansion takes it's roots in every cheesy sci-fi movie of the 80's you've ever seen, but does so knowingly and exploits every single aspect of it. Everything from the Ed Wood-like plot (mad-scientist, horrible monsters, funky uses of radiation and chemistry, evils from outer space, etc...) to the super stereotyped cartoony characters (the Punk "bad" girl, the nerdy geek, the handsome all-american protagonist, the sensitive girl next door, etc..) to the cheesy dialogues and remarks is exploited to full comedic genius. If you've ever seen movies like "Fright Night" (or better yet, the equaly genius spoof "Return of the Living Dead" [which I suspect was a major influence on Maniac Mansion]) you know what I'm talking about. MM's plot forgoes all the "formal" concepts most *CENSORED* close-minded people consider when they judge a good storyline and instead turns the cake around and uses it's brains (for a change) in order to spoof the living daylights out of the definitive pop-culture mainstay of the 80's. Proof positive of it's comedic genius is that as the years go by, and the "nostalgia curve" closes in (15 years or so usually, [if you don't know what I'm talking about go ask someone that knows demographics about the cycling nature of pop culture... basic marketing concepts folks]) Maniac Mansion's plot remains charged with all it's irreverent wittysism, and sarcastic edge.

Want to point out some really bad points of MM? The puzzles could get pretty wicked at some points (so keep a walkthrough handy if you value your sanity) and I agree with some people that the game has some "inconvenient" parts, like waiting around for a package to be delivered when playing with the writter chick, etc... but quite frankly I preffer that timing "inconvenience" to the "inconvenience" of having to type everything you do in the game.

Imitated by everyone, loved by millions, misunderstood by some few sorry dudz. That's Maniac Mansion, the Street Fighter 2 of adventure games. Truly one of the finest games ever conceived and arguably one of the best adventure games ever made. Fortunately for us the few misguided souls that didn't get this game are indeed few and misguided, and MM was a blockbuster hit in it's time and remains to this day a pinnacle of interactive entertainment."

It was great to travel back to the zany world of Maniac Mansion. I first played this game when I was about 12 years old, and I was addicted to it. It was great getting to choose the different characters. At the time I thought it was a breakthrough in gaming technology.

The graphics were very fun to look at and the game is just full of so many surprises. All the characters in the game are great. The story line is awesome.

I am now 32 and it was great to be able to play it again. I'm so happy they have the deluxe version with even better graphics. When I was younger I never actually beat the game so now is my chance to go back and try again. Even with all of today's new games and beefed up graphics I enjoy the simplicity and the color schemes of this game. I wish they still made games this way. They just don't make them like they used to.

It is also a game you can play more than once because you can use different characters each time, because each has a unique ability to do something new. The puzzles in the game are great because of how hard they are. In this game you really have to think about what the heck to do, and there just seems to be so many possibilities and things to do and places to see.

It's very addictive and I can sit there and play for hours without getting bores of it. The variation of characters you use is great. You get all the typical high school kids, from jock, to nerd, to reporter, and musician, its a good mix, its the cats meow, I love this game and the only disappointment I would have is that they never made a sequel or anything even similar to it. That would be great if they made an updated version with today's technology and graphics and sound. I would definitely buy the new version.

So as far as ratings I give this game 2 thumbs up. Four stars. I think everyone should have a try at Maniac Mansion, I is definitely, totally worth playing. So to sum it up - play it. Love it, worship it, it is the B movie of games but with a huge cult following. 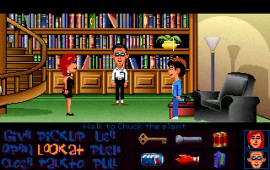