New Adventures of Zak McKracken, The

The New Adventures of Zak McKracken is an excellent fanmade game that stars one of LucasArts' most beloved characters: the hapless reporter Zak McKracken. The game started seamlessly where LucasArts' game left off more than 14 years ago. No sooner than Zak came home from his harrowing save-the-world-from-aliens experience that he learned Annie has been kidnapped. Once again, it is up to Zak to find his beloved and save the world in the process.

Anyone who has played the original game (and you simply must play it if you consider yourself an adventure gamer) will feel right at home with TNAOZM. The interface, style, and sense of humor are faithful to LucasArts' classic, right to the smallest details and in-jokes that are generously sprinkled throughout the game. You even use the F5 key to call up the save/load/quit menu :)

The graphics are very nice, and look similar to the 256-color version of the original Zak McKracken that LucasArts made for Japan's now-defunct FMTowns console. You interact with the game by clicking on verbs from the bottom menu, and an object in your inventory or on screen. The puzzles are not as ingenious as in the original game, but they are pretty decent and not repetitive. It would have been nice to be able to use keyboard shortcuts (e.g. "U" for "Use"), but that is a small complaint.

The original German version contained a tasteless and perverted ending, which fortunately has been removed in the translated version. If you liked Quest for Glory 4 1/2 and other fanmade adventures, you will still have a lot of fun with Zak in his new adventures. A wonderful and polished fanmade adventure that remains true to the spirit of LucasArts. Recommended!

The New Adventures of Zac McKracken is the sequel to the Zac McKracken and the Alien Mindbenders game. This was a LucasFan-created sequel to the classic game that many gamers enjoyed playing while growing up. Although the original game had more interesting puzzles and more challenges, this isn't a bad sequel at all.

The game play and the game rooms and the general feel of the game are basically the same as the original game. In this version, Zac has just returned from his first adventure and is ready for a well-deserved rest when he finds out his girlfriend has been kidnapped! Zac must now work on saving his girlfriend Annie and also save the world in the process.

The puzzles can be pretty good but in the beginning because of the lack of clues and the misleading comments, you might have a little difficulty solving them. The game has beautiful graphics. There are some pretty amazing details which is important in an adventure game where the sceneries are just as important as the game play to create an over-all effective game. The game is pretty short and an experienced gamer can easily finish the game. The puzzles are easy to solve and the story line is wonderful! The humor of the game, the execution of the graphics, the solid game play, the easy controls do very well!

There's a menu at the game where you click the actions that you want Zac to do. In the original game, you get to type in keywords so that Zac can interact with the other items and creatures in the game. The game has a save feature which is absolutely good in adventure games. 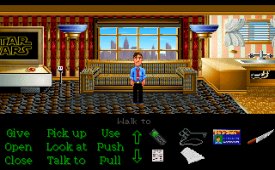