One of the few action/adventure games that truly succeeded in appealing to fans of both camps, Krisalis' highly underrated Dark Earth is a great game that makes up for the short length with captivating artwork, a smooth interface that works well for both combat and adventure, and a very interesting and unique sci-fi/fantasy combination storyline. Games Domain puts it well in the thorough review of this underdog:

"Dark Earth, the world?s first ?realtime? adventure, attempts to redefine the genre by replacing killer puzzles with arcade-like combat sequences. On one hand, this decision has created a far more open-ended game and has eliminated the frustration typically associated with hard puzzles. On the other hand, it makes the game somewhat short -- fully exploring this game is the work of days, not weeks. Fortunately, the story and setting are both excellent, and the combat system is fairly entertaining as well. All in all, the game is great fun while it lasts, and its appeal depends more upon your taste in storylines than preferred game style.

350 years in the future, the world has become completely unrecognisable following an encounter with a swarm of rogue meteorites. Centuries of sun-obscuring clouds have thrown the land into a perpetual icy twilight, leaving little more than strange, twisted creatures to roam the land. Dark Earth begins in the Stallite Sparta where Arkhan, member of the city militia, lives out a fairly routine existence. Not long into the game, fate places him in the midst of an assassination attempt -- a plot he is able to foil only at great personal cost: in saving the ruler of his city, he finds himself exposed to an insidious poison. With the venom consuming both mind and body, Arkhan must search Sparta for a cure even as he slowly transforms into a creature of darkness. Along the way, his newly acquired monstrous powers will come in handy as he works also to stop an evil plan to extinguish the source of the Stallite?s light.

It cannot be overemphasised how well the graphics bring to life the detailed setting of this adventure. I?ve played games with higher technical standards (resolution, animation, colour depth, etc.) but precious few which can match Dark Earth?s overall artistic quality. Throughout the game, backgrounds, objects and characters blend smoothly together to create scenes which are unique and strangely beautiful. The visuals have something of a Renaissance / Middle-eastern feel to them, depicting as they do a society somewhere between medieval times and an industrial age. Gadgetry, seemingly borrowed from the notes of Da Vinci, shares scenes with the bladed weapons of antiquity and scattered artefacts from ?before?. More so than many games, this conveys well the look and feel of a truly foreign culture; and gives curious players plenty of incentive to explore their surroundings.

Dark Earth is something of a rarity among adventures: a story based game. There aren?t all that many puzzles here, and those you discover aren?t particularly difficult. Dialogue, the occasional cut-scene, and a bit of combat must instead carry the game. Keeping with an emphasis on storyline, many of the sub-quests and scenes in Dark Earth are optional. With the exception of a few ?main-quest? segments, it is entirely up to the player to decide where to go, what to investigate, and ultimately, how the story unfolds. Kalisto calls their creation a ?realtime? adventure, and in a way, this is exactly what it is. For one thing, time is the game?s basic limiting factor and resource. Arkhan?s poison works constantly, and will eventually cause you to lose the game. As a resource, time helps you survive battles. By drawing upon your monstrous side, you can achieve special attacks and regeneration -- at the cost of aggravating the poison and reducing your remaining gametime. In this way, combat becomes something of a puzzle, and damage avoidance an important skill to cultivate. It also rewards players who take the time to explore their surroundings: healing items can reduce your dependence upon the costly regeneration ability. Further enhancing the ?realtime? concept, various events seem keyed to an internal clock. In this game, it's entirely possible to miss things simply by failing to be in the right place at the right time. My usual strategy for timed adventures is to save the game, carefully explore, then reload using my ill-gotten knowledge to meet objectives quickly. In this game, however, you can save progress only in specific locations, resulting in some fairly extensive ?scouting missions?.

Dark Earthwas a lot of fun, and I count myself lucky to have been given a chance to review it. Were it not for its lack of serious puzzles (and the ending), I would have considered awarding a GDR Silver. Its brevity makes it a difficult title to recommend; but, longevity tends to be a problem with adventures, and not every game is as entertaining or replayable as this one. Fans (who aren?t completely set on puzzles) should strongly consider this game -- the detailed setting and original artwork alone probably make it worth its price. For others, this is the rare adventure who?s story sells the package, and probably has sufficiently universal appeal to warrant purchase at bargain-bin prices."

Dark Earth is set in a post-apocalyptic society in the 21st century shaped by the fact that the Earth no longer receives the sun's rays due to meteor collisions. In a few areas light breaks through the dust clouds, creating oases for human settlements or "stallites" to flourish. The cities of the survivors have regressed to roughly a medieval state of sophistication, strongly determined by religious rituals and routines, although everywhere there are ruins and functional pieces of technology indicating the remains of an equivalent to present-day society. For some reason the darkness mutates humans exposed to it, turning them into bizarre, hostile mutants. Light is worshipped as a godlike being in Dark Earth's stallites, and the priests are the leaders of their communities. The protagonist is Arkhan, a protector of the priests, who is poisoned in a conspiratorial attack and begins to transform into a dark creature. The rest of the game revolves around finding a cure for his mutation and find out why he was attacked in a race against time.

The gameplay in Dark Earth relies on fairly standard adventure tropes; searching the environment, finding items, and occasionally combat. Interaction with other characters is essential for finding clues and progressing in the game. Unfortunately the movement controls for Arkhan are extremely clunky, making combat a rather problematic affair. Arkhan relies upon food for healing and must continue to find weapons to use as they have limited durability. In addition, Arkhan is also slowly turning into a dark creature. This functions as a time limit because if a certain amount of time passes he will morph completely and the game ends. 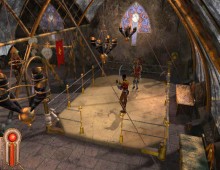