Whole Arabia lived happily under protection of a good Genie which was under control of our hero's family. One day Genie mysteriously turns against the family and takes them away as prisoners. The hero (You name him) leaves his master and begins search for his family... This game could have easily been considered as RPG, but it still had more elements of an adventure. You get many quests on Your way to the end and slowly improve Your skills. Magic also takes big part of the game, as well as character interaction. One of my personal favorites (used to be).

Al Qadim is another roleplay game from Strategic Simulations Inc. and it's based a lot on the same game engine as seen in the Darksun series. Not much of a surprise since the game was developed only a little time after Darksun 2 was published. Although the same game engine might have been used there are still several aspects of the game that are new including the real time combat sequences and the way you gain experience.

You start the game by proving that you are "worthy" to return home to your home village at your parent's home. Quite fast you find out that something is wrong and you are the only one that can solve this. You have to collect different info from several places and on your way fight many different monsters. I will not go much further into the actual story in the game as it's best described after you get to the home village but I can mention that it is one of the interesting things in the game. You can also obtain a lot of information and items by talking with all people that you meet. Note that this is the exact same interface you use as seen in the Darksun series so it's easy to get used to.

Even though you are a fan of the Darksun series or just a general roleplay fan you might still find the new combat system annoying since it's not only real time but also similar to many arcade games where you just move around and press the button a lot swinging the hard around you. At least I prefer the other way instead of this way but Al Qadim is still a good game with an interesting story and tons of gameplay. There are quite a few bugs, which is a bit sad, but by having the latest patches installed it's still possible to play through the entire game without experiencing any major problems. A good choice if you are looking for a new game.

A fun action-oriented RPG, Al-Qadim puts you in a role of a hapless Arab merchant returning home to wed his beloved, only to find that not all is well in his hometown. Although arcade reflexes are a must, RPG statistics are still present and can be increased when your character gains a level. Colorful graphics, interesting plot, and cool magic spells make up for the frustratingly difficult combat and trap sequences. 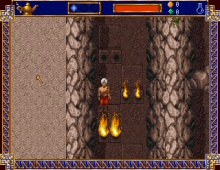