Good story but not so good game. You, as Robin Hood, have been thrown out of Your castle and marked as a villain. It's Your job to reclaim your honor and become a hero. That's it. The game engine is pretty nice, but it has some severe problems. I had trouble even walking around and talking to other characters. Mouse control might be a real pain in the ass, while keyboard is even worse. The characters are very small and hard to point at, so You may have trouble with this either. As I said before - good story but bad execution.

This a great little game I used to play on the ST. The game starts as you, Robin Hood, being evicted from your castle, along with your people, by the evil sheriff of Nottingham.

Your task is to wander the landscape, recruiting merry men, and using resources to get your castle back. Who knows, you might even lull Maid Marrian into your arms in the process.

The game is an isometric view, with fairly decent graphics. You can attack guards with your sword or bow and arrow, see the soothsayer, save peasants from hanging. The sheriff grows to dislike you very easily; if youre not careful, you might find yourself at the end of a long rope yourself ;)

All in all, a fun little game, with good depth of play.

In Robin Hood you must perform many heroic deeds to change the public impression of you from "villain" to "hero." It's a cutesy little game where NPCs do follow their own agenda, and are amusing to watch.

Despite the picture of Kevin Costner on the cover, the game is (thank goodness) not based on the movie. The game begins with a funny intro in which Robin's castle was overthrown. You take control of the sulking Robin outside the castle gates. Your job, of course, is to lead Robin on his quest to regain his castle, by recruiting enough "merry men" and collecting enough gold from unwilling aristocrats. The control scheme is quite awkward, and complicated by the very tiny graphics. Rescuing Will Scarlet, for example, involves shooting his captors with your bow. Save your game before you fire, as you're just as about as likely to shoot Will instead of the guard. This is mildly irritating, but actually goes along well with the feel of the rest of the game. Beware of the confusing interface though: user-friendly it ain't, and the tiny animations are hard to see, not to mention some frustrating action sequences and obscure clues. Those who are patient will be well rewarded with an amusing little game. 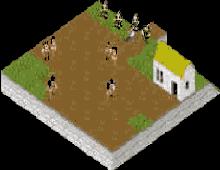