A fun but frustratingly difficult action adventure that is all but unknown outside a few countries in Europe, Bermuda Syndrome tells a story of Jack, a World War II fighter pilot who was shot down into a mysterious jungle during a dogfight. As his plane comes hurtling out of the sky, we first catch a glimpse of our princess (yup, the Amazon-type one), all tied up and ready to be a Tyrannosaur's lunch. Fortunately for her, Jack's plane chops its head off on the way to crashing. After making sure we all know who's who, we are treated to some very rich images of Jack hanging from a tree by his parachute, with the princess still tied up on her platform. Welcome to the first puzzle...

Bermuda Syndrome is a side-scrolling action adventure that will immediately remind everyone of Delphine's Flashback, an earlier game. The similarities are more than skin-deep as well (although the graphics in Bermuda Syndrome are ten times better, all rendered in SVGA): both games successfully blend traditional adventure game elements (e.g. inventory-based puzzles, character interaction) with action sequences. The controls in Bermuda Syndrome is not as intuitive, however, and coordinating some of the moves can take some practice, so you must save often. One of the major differences is that in this game, you need to worry about the *princess* even more than yourself, since she tags along merrily, oblivious to any danger she faces-- and she can't fight, jump, or swim like you do. This means you not only have to deal with menacing dinosaurs of all kinds, but also have to protect the princess and keep her in your sight all the time. Fortunately, she does serve as an in-game hint system, and talking to her when you're stuck will often yield important clues.

In addition to an unnecessarily difficult interface, the game strongly reminds me of Silmarils' impossible Robinson's Requiem: the game is HUGE (228 screens, to be exact), and you'll die a thousand deaths before finally finishing it. It's safe to say that adventure game fans who are not also masters of action games will likely be too frustrated to play the game to the finish. Which is somewhat a shame, because the interesting story and some ingenious puzzles compensate for the difficulty leval. As it is, though, the game is only recommended to action experts who want some adventure in their gaming, not the other way around. Two thumbs up, but not for the faint of heart or the weak of reflexes. 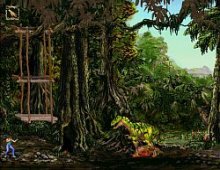