Bioforge is an action/adventure game that tries to do a lot, and only succeeds at some of it. Also it is at times ridiculously difficult, and combat can be a frenzied, disappointing experience. Still I love this game, because of the great plot, the excellent atmosphere, and the at the time state-of-the-art textured polygon graphics. The voice-acting is some of the best I've heard in video games (not a lot of competition) and actually adds to the atmosphere rather than looking tacked-on.

Bioforge casts you as an unknown test subject in a diabolical secret research project by some cultish baddies. You've been made into the ultimate killing machine, and you have been stripped of your memories. Your goal is to escape and find out your identity, hopefully punishing your torturers on the way. Sort of cliche to start, but it picks up nicely when you escape, and beat your fellow cellmate to death with his own severed arm...

Weird, huh? Well that's Bioforge. If you don't take the time to read every datapad and other information you come across, stuff will make no sense and you'll want to rip the CD (or the CD-rip) in half. If you do look around carefully, you will see that the guys at Origin put a hell of a lot into this game. There is an explanation for everything you've done and every thing you need to do. The trouble is finding it.

Combat: A necessary evil, but once you're good at it, you can trounce anything that moves. The key thing is pausing your mad mash of buttons so your character can turn back to face your foe. Otherwise you will be off target and get caught in an endless fullisade of punches and kicks.

There's some agonizing sequences (the reactor, for one), but if you think before you blunder into them, you'll do fine. The end game is extremely satisfying, since your character is kitted out with alien weapons and shields and you basically beat down about ten space marines in a row. Turning on the power to the alien base and finally killing that damn alien soldier is fun. Another neat thing about the game is it feels like a Schwarzenegger movie. Your character is full of campy one-liners and amnesia-movie cliches during combat, and I for one found it great fun to listen to. The ending and beginning cinematics are also great, almost movie-quality.

So if you like adventure games, but won't shy away from a little action, Bioforge is your ticket. It reminds me of Out of this World with its combination of action and adventure. You'll just have to read a lot more. 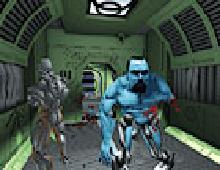