The first part was a great success and it was logical that part 2 would come up. And it did! Goblins strike again. This time, there's only two of them but the game is still the same - complete the task and proceed with the adventure. If You played Goblins and liked it, Goblins 2 will amaze You even more. A must have.

The plot of this game is to save the Goblin King's son (sounds stupid, but it's really not :) Those fuzzy goblins will make you laugh to the bones, and personaly i prefer this game on the first. Highly recommended.

An excellent game - a very worthy successor! This time the son of the king's got to be saved. You're no longer controlling three Goblins but two (that's why there are only 2 "i" instead of 3). Fingus and Winkle settin' out to do what has got to be done one of them got the brains while the other one is... well - blue. Very funny, very addictive, just RIGHT!!! Sort of puzzle-Adventure with a little bit of action and good humor. If you liked the first one, you'll also like this one. I played this back in my Amiga-Days - it's still great and I can't decide whether it's even better than Gobliiins (the first part). But - hey! It's not up to me...

The avalanche of hair-raising puzzles continues in this sequel to Gobliiins 1, albeit with a totally different plot (save Prince Buffoon (yeah, no joke) from the --you guessed it-- the evil maniac). The sound and the graphics are much improved, and the plot, story, and characters are even funnier. As in the first game, one of the charms of Gobliins 2 is the funny animations and character voices, gibberish though they may sound. You'll chuckle at the goblins' antics and their expressions when they are being crushed, bashed, or even eaten.

Don't let the game's cartoony style fool you, though: this is one difficult game-- controlling one less goblin (hence the missing "i" in the title) doesn't make it any easier, especially it is not as obvious as in the first game what each character can do. This makes it much more frustrating than the first game, as many puzzles require trial-and-error. Still, if you like its predecessor, you'll probably like the goblins' second outing. Recommended, but for puzzle experts or anyone with infinite patience only.

The Prince Buffoon is the second installment in the Gobliiin series adventure-puzzle games. While it is just as humorous and entertaining as the original, it is more challenging and often frustrating.

The plot is very similar to the original. This time the prince goblin has been kidnapped by the evil Demon King Amoniak out of revenge for his defeat in the original game. To humiliate the king, Amoniak has made the prince his personal court jester. The two 'heroes' selected to rescue the prince are Winkle and Fingus. In the game you are put in charge of the two characters and your objective is to solve the many bizarre challenges, overcome guardians, and make your way to face-off with the captor.

In the game you control the actions of two characters, Winkle and Fingus (hence the 2 'ii's in Gobliins). Fingus is the logical, well-mannered goblin. Winkle is the aggravating, dumb but brave, purple thing. Each character interacts with objects in different ways. Both can pick up, carry, and use objects; interact with the environment; and talk to other characters. Your job is to utilize each of their skills, and figure out which one best suits the task. You will need to use your imagination and figure out each (usually ridiculous) puzzle. For instance, in one scene you need to get Winkle to tickle a chicken, and then have Fingus hit it with a sausage. I think everyone should experience the strange sense of achievement that comes from solving a completely illogical puzzle.

The point-and-click gameplay is similar to the original, except you now only have two characters to control instead of three. This game has great cartoon-style graphics, which have been slightly improved from the last one. The music I found to be annoying, so I'd recommend turning it off. One useful new feature is a Notepad function which allows you to record any important information you like. You can also now swap objects between characters. Levels now incorporate multiple screens, and the puzzles have become more intricate and more bizarre. You only get three 'jokers' (hints) to help you in the game; don't waste them. My advice: think outside the box and try your ideas with both characters.

Gobliins 2, the Prince Baffoon is a brilliant classic. For a Point-and-Click game it is very difficult. Luckily the immature wit makes up for the frustrating challenges. If you like puzzles, slap-stick humour, and are looking to kill a few hours, than this is the game for you. 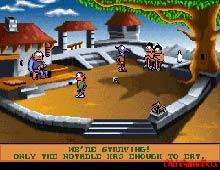 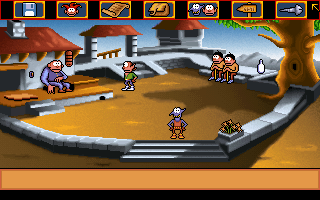 People who downloaded this game have also downloaded:
Gobliiins, Goblins 3, Veil of Darkness, Ecco the Dolphin, Adventures of Robin Hood