Well, the basic concept of Starflight II is just the same as in the first part - but they surely enhanced the game itself - 2 new alien races are expanding and a mysterious dark cloud in the center of the galaxy is causing trouble. To find out more about this you got to build up your crew and the ship. You need money for this and so you got to trade to make money - this is even more important in this game than in Starflight I.

While the main parts of the game come up with the same graphics you know from the first part the pictures of the aliens are really nice to look at now. The atmosphere got even more intense and you get that nice Enterprise-Feeling. This is one of the must-plays among the sci-fi RPGs. Just one warning: always exit the game properly otherwise the saved game becomes corrupt and nothing will work anymore!

A great sequel to the classic that spawned the entire space exploration/adventure genre, StarFlight 2 improves upon its predecessor in every respect, with better graphics and more of everything: star systems, alien races, and -- of course-- alien artifacts. The plot continues where Starflight left off: the Spemins, the weak underlings when we last met them, are now a superpower race bent on conquering the universe. As starship captain, your mission objective is to find the souce of the fuel substance known as Shyneumand, and acquire the technology the Spemin mysteriously discovered that turned them almost overnight from whipping boys to galactic threat. Only then can their aggression be stopped and peace return to the galaxy.

Starflight 2 follows firmly into the footsteps of its predecessor. But taking the "if it ain't broke, don't fix it" philosophy is definitely not a bad thing in this case. Like Starflight, there's a fascinating plot that slowly builds to an exciting climax after a cliche start. The aliens are much more varied and hilarious this time around, and the (appropriately) dark universe of Starflight has been replaced this time with a more dynamic universe that is full of life and exciting mysteries. Additional features such as time travel makes the gameplay even more varied than it was in the first game.

In short, if you love Starflight, Starflight 2 is simply a must-have. It may not be as revolutionary as its venerable predecessor, but all the additions make it a worthy sequel in every respect, and a no less addictive game. Be prepared to spend countless sleepless nights with this one :)

A new section of the galaxy to explore, new aliens to meet, and the chance to kick a few blobby Spemin butts - if you like Starflight 1 your gonna love this game.

So is Starflight 1 better than Starflight 2? The answer is Yes and No. Yes in that its a bigger game that has better graphics and sound. And of course that it gives the people who like the first game another Starflight fix. Also the plot is just as imaginative as the first game, maybe even more so.

No in that the game doesn't seem to have the same "magic" as the first one did. Maybe it's just the fact that the game isn't a new experience any more, at least to me (the first time I played Starflight 1 it just blew me away.)

That aside tho, there is still plenty of new things to discover, including many new and varied alien races - the terminally depressed Dweenie being my favourite - I just find them hilarious for some reason. Also the idea to change the Spemin from cowardly little "whipping-blobs" into a massively powerfull race is a masterstroke, as are the "time travel" parts of the game - but I dont want to give away too much, like I said before the beauty of Starflight is discovering things for yourself.

Extra Info: Type in the code 34789 to bypass the copy protection. 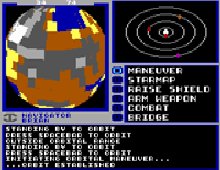 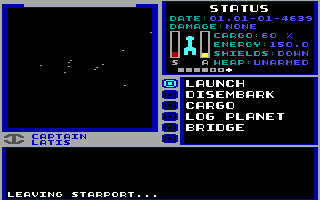