Essentially Falcon 2 but somehow marketed differently, Falcon AT is the second release in Spectrum Holobyte's revolutionary hard-core flight sim Falcon series. Despite popular belief that Falcon 3.0 was THE dawn of modern flight sims, Falcon AT actually is already a huge leap over Falcon, sporting sharp EGA graphics, and a lot of realistic options and greatly expanded campaigns. The game is still the simulation of modern air combat, complete with excellent tutorials, varied missions, and accurate flight dynamics that Falcon fans have come to know and love. Among its host of innovations is the amazingly playable multiplayer options-- including hotseat and over the modem. Largely forgotten now, Falcon AT serves to explain the otherwise inexplicable gap between Falcon and Falcon 3.0. Definitely a groundbreaking simulation in every respect, and a must-have for every armchair pilot. Recommended! In 2001, G2 Interactive purchased copyrights to the entire Falcon series from Hasbro, current owner of MicroProse. 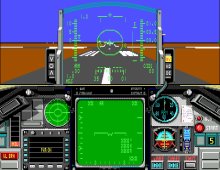