Nice flightsim, landing is a bit tricky and starting might not work on first try either, but flying this baby is a real pleasure. Plenty of missions to fly, 2 different jets (you can also fly the top secret F22) - and did I mention that flying the Retaliator just flies great? Yep... so what are you waiting for?!

You got the idea - I'm not a real expert when it comes to flightsims. But the fact I enjoyed this one should for once alarm the hardcore flightsim fans among you (it's not THAT realistic I guess, but who am I to judge?), but on the other hand it might interest those among you who, like me, aren't into all these technical details.

Like most game released during the height of the Cold War, the aircraft model is based on speculation. The F-22, never seen at that time, was modeled like the artists' impressions on books about (then) future fighters. The F-29 looks more realistic, because the X-29, a technological demonstrator on which it is based, is widely known at that time.

The game takes you to 4 theaters of operations: Nevada, Europe, Pacific and the Middle East. You have a fixed number of missions to choose from from each theater. You fly air-to-air and air-to-ground missions in these fairly interesting (and challenging) scenarios.

Graphically, Retaliator was advanced for its time. It clearly showed the looks we will see in its sequel, TFX, with excellent graphics that depict cities, bridges, and even moving vehicles. The flight modelling is simple. The array of weaponry is quite bewildering, including the speculative AIM-9X backward-firing Sidewinder.

My biggest complaint for this game is the ridiculously small play area. The size of the map is perhaps comparable to the one in Falcon 1.0. In light of the super-cruise capable F-22, the size of the map quickly feels cramped.This is especially true because even F-19 Fighter, released 2 years before, already give us the whole Central Europe as our playground.

Still, Retaliator is one of the better action-sim game for its time. This game delivered what its designer wanted to do: fast-paced, hi-tech action. Good enough to pick up when you feel nostalgic for the good old days of gaming during the Cold War. 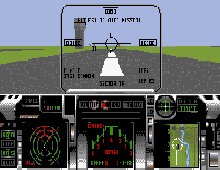