Digital Integration's first sim that was published by Electronic Arts still stands the test of time as an accurate simulation of F-16 Falcon (given the hardware limits of its time). Outstanding campaign and training mode first seen in this game would become DI's hallmark. As you progress through the game, you will be assigned to different squadrons, each based in a different location. You can pick what mission to fly from a number of available mission types: Scramble (dogfight), Hammerblow (ground attack on military targets), Deepstrike (ground attack on bridges, factories etc.), Tankbuster (anti-tank), and Watchtower (reconnaissance). Once more, DI outdid themselves with a solid sim that would undergo a heavy remake a decade later. 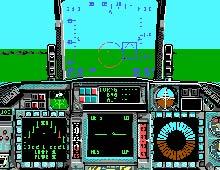