A decent flight sim from GemSoft that offers good graphics but not much realism or long-term play value. From the description at MobyGames:

"Fighter Wing is a flight simulator that instead of concentrating on a single type of aircraft, covers a wide array of flyable planes. You get to play in either Nato or soviet sides in a series of scenarios (no campaign mode) that take place over fictional situations (the President goes insane and orders a massive strike, etc.). On the Nato side, you can fly the F-4, F-15, F-16, F-18 and F-117. While on the Soviet side you get the MIG-21, 23, 29, 31 and the SU-27.

Graphics are completely 3d with gourad-shaded polygonal aircraft complete with insignias and other details, also present are clouds, smoke effects and ground modeled on actual map terrain and there's multiplayer support for up to 16 players."

Despite the good variety of aircrafts and scenarios, the game's longevity is hurt by the lack of career mode, although multiplayer options help. Overall, an average flight sim that doesn't really offer much beyond the variety of aircrafts (most of which feel the same anyway). For a more polished and realistic execution of this multiple-aircraft-in-fictional-scenarios idea, try Evasive Action instead. 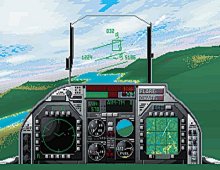