Yet another solid Amiga RPG that failed to make a splash on the PC, Whale's Voyage recounts the voyages of the Whale, a curiously-named spacecraft, as its crew make a frantic effort to return to Earth. to The game puts a new twist on character creation, as you can not only adjust the statistics each of your 4 crew members, but also the "mutation rate" which enhance their abilities but make them more susceptible to diseases. It's a fun space trading / exploration RPG that recalls Planet's Edge but with more emphasis on trading than combat. 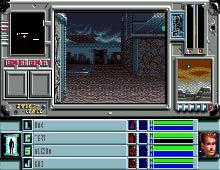