Wasteland is a top-view, turn-based RPG, where you control a group of characters and set out to stop whatever it is that threatens the world on this occasion.

Yet in my opinion, Wasteland is more than this, I consider it the best RPG ever developed, and there is now doubt that the game was groundbreaking in its time. Instead of using a rigid class-based system ("you can't do that because you're a paladin, not a fighter") Wasteland used a skill-based system, meaning your character can do anything you like, providing they have the necessary skill. This allows you to create flexible characters and truly ROLE-play, your characters develop a persona based on how they develop under your command, as opposed to a pre-determined path chosen at the start of the game.

But skills are not the only item of interest in Wasteland; for what sets the game apart from even some modern games with better graphics and systems is the colourful world the game is set in. Wasteland is set in a post-apocalyptic world where you control a party of 4 "desert rangers", vigilantes who try to maintain order in the chaos following the fall of modern civilization. The game's many and varied locations are both engaging and imaginative, and you will be further and further drawn into the world the more you play.

As with many other games (like Bard's Tale), the current owners of Wasteland are sitting on the rights, and the sequels being developed for Wasteland were never published, and no more can be created. The game does however have spiritual successors in Fallout 1 and 2, both of which draw many elements from Wasteland.

Overall, Wasteland is a well-designed and engaging game, not to be missed by any who consider themselves RPG fans. Find it and play it!

My most favorite RPG ever, and one of the very few games that earned a permanent place on my hard drive since the first time I installed it, Wasteland is an epic post-apocalyptic RPG that set new standards for the genre that arguably have not since been matched. Set in the California after World War 3 nuclear holocaust, the game casts you as a band of Desert Rangers, a vigilante group intent on bringing some order into the bleak, chaotic society. from town to town, gradually uncovering a sinister plot that threatens what's left of mankind. Just how good is the game, and why does it deserve to be in every RPG gamer's collection? George Shannon's eloquent review for MobyGames says it much better than I could: "Even with outdated graphics, the setting sets one's imagination aflame, using familiar elements from life and including them in the game, but overlaying the horror of nuclear war on top. While some of the darker elements aren't as evident, it's still very obvious throughout the game that there is a detailed, thoughtful, and even meaningful post-apocalyptic theme everywhere.

Another element that makes Wasteland such a great game is the character development system. Most RPGs have a player select a class for a party member - but what IS a class? Does it let YOU role-play? No, the class tells you what and how to role-play. Does it enhance the game? Perhaps, but once the class is defined there's no real development OF the character - A level 1 knight has the same desires, goals, and value systems as a level 18 knight. Wasteland uses a skill and attribute based system, periodically giving a character 'points' to use on attributes and skills, as well as having skills increase through use. But moreover, the character development doesn't stop when you use up the points - many places in Wasteland allow a character to separate from the rest of the party and engage in some solo activity - maybe hooking up with a prostitute, or venturing into a cat-and-mouse game within the mind of an android. Stuff like this builds the character individually, and thus, the party. By the end of the game, I look at my characters and not only see what they are (level 20 Corporals, demolitions dude, charismatic leader, tech expert...) but what they went through... their individual victories and tribulations. This makes for a very powerful gaming experience.

In other areas, Wasteland does quite well. Graphics are average to outstanding. The play balance is nearly perfect - the advancement from one area prepares you quite well for the next, neither too hard nor to easy. Not many sounds are included, fortunately they are simple and do not get repetative. Overall, even without the character development, Wasteland is just plain fun.

With such a positive personal slant on Wasteland, it's hard to define problems with it. In some places, the appearance of enemies is too 'generated' (they pop up out of nowhere, Bard's Tale style) and are seemingly endless. Some enemies and situations are a little too 'weird', but Wasteland isn't supposed to be about realism. Some plot elements are a little cliche, but most are handled quite well.

Wasteland is an amazing ROLE-playing game. The setting is thorough and detailed, your characters can get into all sorts of trouble, as individuals and as a party. This makes Wasteland a unique experience every time."

It is too bad that the official sequel Mean Time was never made, and Fountain of Dreams, Electronic Arts' "unofficial sequel" is extremely disappointing. With a unique skill-based system that lead to many excellent adventure-style puzzles, intriguing plot with tons of '80s references, and a truly epic scale full of many hidden surprises and subplots that guarantee hundreds of hours of play and replay value, Wasteland is simply a must-have. If you wonder where Fallout came from, this is its true predecessor (and a game I infinitely enjoy more than Fallout series). A classic in every sense of the word. 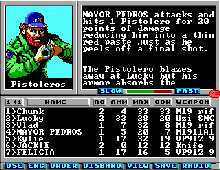 People who downloaded this game have also downloaded:
Pool of Radiance, Ultima IV: Quest of The Avatar VGA, Bard's Tale 1, Betrayal At Krondor, Curse of the Azure Bonds