Betrayal at Krondor is quite possibly one of the greatest RPG's ever, on any platform, period. It features excellent game mechanics, a good combat and magic system, and most importantly a storyline and dialogue written by the fantasy genre's most popular authors, Raymond E. Feist.

Feist was implicitly involved in the making of the game, and being an avid fantasy gamer himself, made sure that it was a game he'd like to play himself. Consequently, it offers one of the richest and most entertaining gaming experiences ever in an RPG.

If you're a fan of Feist's writing, you'll love the game even more, but it's not necessary to enjoy the game. Be warned that playing it may make you want to read everything Feist wrote, and that's a lot!

This is simply one of the best RPGs ever made. It features an outstanding plot, superb graphics(for the time), and the licensed character of the novelist Raymond E. Feist (someone there knows him?).

Anyway, as I said up there, the story is damn good, divided into "chapters" like a book... in fact this game has many similarities to a book, from the introduction to the excellent "book-like" descriptions wich divide chapters. Well, returning to the "story" stuff, it narrates the war beetween the northern elven and southern human region of the kingdom of midkemia, and the struggles of some heroes (guess who these heroes are? ^^) to stop it before it becomes too late to avoid a genocide.

This game has many subplots and subquests, and it is in fact possible to leave the "main road" and do what we please, until we're tired of our pilgrimmage in the large gameworld and we'll want to return to the main quest..finding out that we remember NOTHING about it..and this is, in fact, the only fault this game has: NO journal, you have to write it by yourself, like me, or to remember everything (in this case, you may be certain to be some sort of genius, since the informations you get in the game are a HUGE amount..but this may be seen by some as a decision of the programmers, to make the whole thing more realistic...

Technically the game features the FIRST Real-3D engine ever seen in a RPG (the one in the various Ultima Underworld is a fake 3D engine), of course it is nothing exceptional, but at least you can say "hey, I'm THERE!". Musics too are very good and never get tiring or annoying, plus the game has a very nice combat management and a finally ORIGINAL spell system..I was really getting tired of that mana stuff.

If you are a hardcore roleplayer, you can't avoid but to play this...

Note: I had some problems making this game run, since it requires 600KB of conventional memory (wich is NOT ram, to check your amount go to the DOS prompt and type "mem"), so if you aren't able to bring your comp to this amount, don't download this game..or download it and try to use its "make boot disk" feature. ;)

One of the best RPGs ever made, Betrayal at Krondor is a classic example of games that get rave reviews yet do poorly in stores (at least until it was re-released on CD-ROM). Flat "paper-doll" digitized graphics is just about the only criticism you can level at this classic, which features an excellent plot written by best-selling fantasy author Raymond Feist (who also had considerable input in the design process), memorable characters, cool spellcasting interface, and an abundance of optional sub-quests and riddle chests. Sierra made the game freeware in 1997 to promote their own sequel Betrayal at Antara (which, without Feist' s input, is a pale shadow of its predecessor). Suffice to say that noone can claim to be an old-time RPGer if they have never set foot in Krondor :)

This game is said by many to be one of the best fantasy RPG's ever made. Raymond E. Feist the well known creator of the Riftwar saga worked closely with the production team ensuring a faithful reproduction of the world of Midkemia where this game takes place. I personally, hadn't read any of Feist's books before I played this game but this did not detract from my total enjoyment and immersion into the fantasy world of Midkemia and my total appreciation of this game.

You control three characters (together or alone at certain parts of the game) in their adventures around the land of Krondor: Seigneur Locklear, a citizen of Midkemia, his prisoner Gorath, a Moredhel elf and a young magician named Owyn Beleforte. Gameplay is of the standard RPG-style that will be familiar to fans of the genre, with a turn based system for combat and movement and multiple-choice options for conversational dialogue. The outstanding part of the game is the detail that has been implemented in the combat and stats system without making the system too unfriendly or cumbersome. All weapons and armor have damage stats which you will have to watch in order to prevent them from breaking but you have to avoid repairing too often for each time you do the max sturdiness of your item becomes slightly less. You will also have to carefully monitor your food reserves so that you don’t starve and take care that you don’t accidentally eat spoiled food lest you get poisoned. Combat takes place on a combat grid where you can take control of character movement and position which can often be crucially important to minimize the risk of harming characters on your own team e.g. with missile weapons.

Unlike many Dungeon hacks of this genre, a significant amount of adventuring in the game takes place outdoors and above ground, as your adventure takes you around different parts of the land of Krondor. This inevitably means it will be difficult for you to explore everything in the game and find all the cool bits of treasure. But, on the other hand, this isn't required or advisable as you can complete most of the important goals in the game by safely sticking to the main roads and paths without searching every shrub and digging up every grave on the wayside.

The graphics through most of the game is standard artist-rendered 2-D backgrounds with photo-manipulated foreground graphics overlaid on top. Basically most of the character graphics are compiled from images and video of actual real life actors in costume which at first can seem a little cheesy. But when you get increasing exposure to the impeccable consistency of the whole environment and the look and the culture of the world the quirky graphical style quickly grows on you. NPC's are likeable, believable and look as if they belong in the game world and the colours, sound and decorative graphics all contribute to one cohesive enjoyable pattern. As a result it doesn't take long before you come to regard Krondor as a believable land with great character.

I highly recommend this game for all fans of RPG's such as the Wizardry series or the Ishar trilogy. And to anyone who frequently plays hack and slash dungeon crawls, get this to see how a proper RPG setting ought to be constructed. 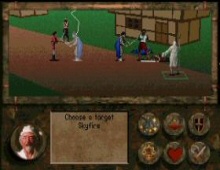 People who downloaded this game have also downloaded:
Bard's Tale 1, Lands of Lore: The Throne of Chaos, Eye of The Beholder 1, Pool of Radiance, Curse of the Azure Bonds