Lands of Lore: The Throne of Chaos

Westwood's Lands of Lore: Throne of Chaos is sequel in spirit to acclaimed Eye of The Beholder 2, but surpasses its AD&D predecessor in every way. The game broke new grounds with astounding graphics, great soundtrack, intuitive user interface, great spell effects and plot development, and last but not least, excellent automap.

Lands of Lore begin with an intriguing, albeit cliche, premise that is no less dynamic than those in Eye of The Beholder series. While consulting with Geron his counselor, King Richard of Gladstone received an alarming news: after countless futile attempts, Scotia the mad sorceress finally obtained the nether mask, a magical artifact that grants the wearer the power to change into any form. He immediately entrusts to his champion (you, of course) and the task of destroying Scotia once and for all. Westwood eschews traditional RPG character creation in favor of simple statistics, but for the most part, it works. You can choose from 4 characters depending on your preference in weapons/magic balance.

Rarely has an RPG -- or any game for that matter-- been able to entice the player into its world as quickly as Lands of Lore. I remember playing the game for the first time, exploring Gladstone Keep and the forest beyond, collecting all sorts of neat items, battling well-drawn monsters, casting a few spells with amazing effects, seeing my character gain a few levels, annotating the best automap I've ever seen, watching amazing plot development through in-game cutscenes... the next thing I knew, the sun had come up. The game had kept me playing for 6 hours straight-- I can't think of a better recommendation than this :)

Lands of Lore remains to this day one of the most accessible RPGs that stand the test of time, with the power to convert even the most ardent RPG dissenters into hapless addicts. It may not be original or even revolutionary, but it is definitely a flawless execution. The CD-ROM version features the voice of Patrick Stewart as King Richard, along with other multimedia enhancements that make the game even more atmospheric than the floppy version. As a game design, it is a role model; as a game, it is simply a must-have.

Personally I consider this one of the mother's of RPG games at the beginning you are asked to choose a hero by the King of the story played by good old Patrick Stewart. There are four heroes to choose from, each varying in the abilities your character will need for the game, however Conrad always seems the most rounded and if you have never played the game before I suggest choosing him. The game then starts straight away within the King's castle, you may visit the herbarium and the armoury for medicines and weapons before you start your journey. During your journey you will travel through forests, swamps, caves, mines, castle's and dungeons. You also do not always travel alone, several characters will join and leave your party throughout the game. Lands of Lore also comes with an auto-mapping feature, you will find in the library at the beginning of the game, which is immensely useful.

The whole point of the game is to track down the evil witch Scotia, mistress of shape-change and destroy her - sounds easy however it takes an immense amount of time. You will find yourself sitting in front of the computer for hours with this game.

The graphics look a little ancient, but I play a lot of old games, especially dos and I find this one quiet easy to look at compared to others of its time. Of course as with many old games you do have the plain forward, back, left and right functions, meaning you can turn a corner and have an opponent ahead of you already slashing away. I recommend always having the sound on, else you will find your life going down and wondering why until you turn your character full circle to find a large lizard has been eating away at you for about half an hour.

I think anyone who enjoys RPG will love this game, the characters are well thought out, the maps of all areas are excellent and exciting to explore, the villains are fun to hack away at - especially with the strength feature, choosing whether you'd like your monsters to be wimpy or vicious! And there is plenty of hours of fun for your money - it's a game I have played over and over again. My advice is, pay attention, if you miss something it's hard to go back, also pick up everything! However steer clear of collecting too many rocks in your inventory, otherwise you won't have enough space for the important things. Also be aware Scotia is a shape-changer, she appears in many forms, so be careful who you talk to. Lastly, if you get stuck, don't give up, sometimes there are several ways around a problem in this game.

BUT, note that in the mines there is occasionally a glitch with the first pit and teleport combination you come across, you may need to press the wall button a few times instead of just once, which is the usual rule, to get it working. 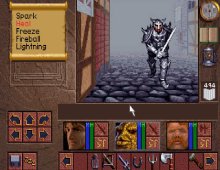 Lands of Lore: The Throne of Chaos screenshot