Treasure Hunter G is another excellent console RPG that was never released outside Japan. It was also the last RPG Squaresoft released for the Super Nintendo system, and shows Squaresoft to be at the height of their SNES game-making craft. The graphics in Treasure Hunter G puts some PlayStation games to shame - it is no small feat to pull off 32-bit-looking graphics on a 16-bit system like the SNES. The plot is nothing more than a typical "destroy evil" plot found in most RPGs, although it starts out with an intriguing premise: you control a team of brother and sister, accompanied by their grandfather, as they explore a cave where the an aircraft called 'Fenric Falcon' is reportedly discovered. Soon you will discover that some sabotage is going on; the cave is soon rocked with an explosion, and the Falcon soon took off - taking your father with it. Although your initial quest is naturally to find and rescue your father, you will soon discover more weighty plot elements that make being a hero all worthwhile.

Treasure Hunter G truly shines in the gameplay department. Although it plays like a typical console RPG (i.e. battle monsters, talk to NPCs, and gain skills and experience), it is deeper than most thanks to a turn-based, tactical-style battle interface similar to Live A Live and Realms of Arkania games on the PC. When you encounter enemies, the screen shifts to a grid-based battlefield, with your party starting off on one side of the grid and the monsters on the opposite. You can move your party closer to the enemy (diagonal movements are allowed) in order to attack, or further away in order to escape the battle entirely. Since you have a limited number of 'action points' to spend per turn, you must plan your moves carefully. This adds a fun element of strategic overlay to an already interesting game. One feature I like about the battle screen is that the type of loot you will get from winning the battle is shown on the ground. That gleaming sword waiting to be yours helps make you concentrate on the fight, as opposed to the exit tile ;)

The gameworld in Treasure Hunter G is rich, although it is not as large (in terms of square miles) as epics like Final Fantasy games. Each town is teeming with NPCs, all of whom either have stories to tell, advice to dispense, jokes to entertain, or goods to sell. Although the main plot is linear, it is full of many sub-plots and branches that keep it interesting. Flashbacks are used heavily throughout the game to tell you about the backstory of each of your party member.

If you enjoy console-style RPGs in general, Treasure Hunter G is a must-have. It is one of the best-looking games on the SNES, with plenty of charming characters, cool weapons, and challenging monsters to keep you occupied. Thanks to the translating efforts of Metalhawk and his team of fans, the game can now be enjoyed by English-speaking audience. Highly recommended. 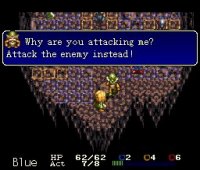