In 1996, Alien Software released the first three episodes in the Neophyte universe, an RPG gameworld similar in style to anime RPGs commonly seen on console systems. The episodes, all released as shareware although they are complete games in their own right, quickly garners a sizable cult following among fans of console RPGs. It's safe to say that until SquareSoft ported its successful Final Fantasy series to the PC, there was never a better-looking, more faithful console-style RPG than Neophyte. Unfortunately, Alien Software disbanded, and the complete game (which would combine these freeware episodes, as well as additional ones, in a huge gameworld) was never released.

The Spirit Master is the third and final shareware episode of the Neophyte saga and is arguably the best ? it is certainly the most impressive graphics-wise. This time, we are introduced to Neika Mantru, a young warrior with some unusual abilities. Neika has just turned 15, and so must undertake a "spirit quest", which requires her to explore the outside world beyond the secluded clan. At the same time Daru, Neika's father and clan healer, is troubled because he has seen in a vision that a great evil has returned to the world. He believes that his daughter is key to stopping this evil. So Neika must follow her spirit guide out of the forest and find those who can help her complete this Herculean task.

So begins the game. As explained in the introduction, your objective as Neika is twofold: find her "inner soul" via the spirit quest as well as discover and destroy the evil presence. Along the way you will of course encounter monsters, magical items, and strange people who aren't hesitant to dispense free advice. As with the previous game in the trilogy, Koplio's Story, Spirit Master features breathtaking graphics that rival console RPGs. This time, however, the graphics are even more stunning: 2D graphics are used in overlapping layers, giving a great illusion of depth. As you wander around Neika's village, you will be amazed to see trees casting shadows on the ground, with rustling leaves and smooth-as-silk parallax scrolling. While the plot is not original, the writing is excellent, and a far cry beyond grammatically awkward sentences that plague most console RPGs. The combat system is much more interesting than the first two games, because for the first time you have access to spells and special abilities.

Overall, Spirit Master is a rock-solid console-style RPG that provides a fitting end to the shareware trilogy that unfortunately never saw the light of day as a commercial release. Definitely the best anime-based RPG ever made for the PC until SquareSoft got into the fray with Final Fantasy VII. 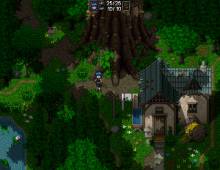