Romancing Sa-Ga series is one of the best example of hit RPG series for the Super Nintendo that are tremendously popular in Japan but little known outside - in this case, for the usual reason: Squaresoft decided not to translate the game into English. This is an unfortunate decision, because Romancing Sa-Ga is one of the few console RPGs that deserve the words "complex" and "challenging" - something that would appeal more to fans of RPGs on the PC than fans of, say, Final Fantasy series.

Although not as good as Romancing Sa-Ga 2 which is considered the best of the series, this third installment is still excellent. The hallmark of the series is the diversity of characters you can control, each of whom has his/her own storyline, sub-plots, and ending to see. In this game, you have a choice of 8 characters to play at the beginning of the game - not counting other characters you can recruit along the way. This means the game offers at least 8 completely different games - something even the most replayable of PC RPGs would be hard pressed to compete with. Each main character has his/her own backstory and motives, and most of these are quite interesting - a far cry from the usual "kill the big foozle" cliche of most RPGs.

Another hallmark of the series that set Romancing Sa-Ga from others is the unique experience/skill system. In contrast to other RPGs in which you gain a number of new skills or better stats when your 'experience level' goes up, in RS3 your skills and stats go up individually as a direct result of your actions - there is no levelling-up in this game. This means that you will have to - for example - use weapons or cast spells frequently if you want weapon skill or magic skill to go up. This lends a nice feel of realism to the game, and makes it more sophisticated than most console RPGs. To add to the complexity, there are also 3 different kinds of battles: normal party-vs-monster battles (most 'micro' level), commander battles (squadron level), and war battles (strategic level). You can select formations in commander battles, and command an entire army in the war battles - similar to wargames. Your characters can also learn different 'Techs' for weapon strikes, making the range of attacks very diverse and interesting.

The game is huge, to say the least. No matter who you play, there are over 15 characters scattered across the world for you to recruit, different side jobs to take, and different side quests to explore. Fittingly enough for its complexity, RS3 is also much more challenging than your average console RPG: gold is hard to come by, and you will have to fight literally hundreds, if not thousands, of monsters before finishing the game.

With a unique experience/skill system, a staggering variety of characters and plots, and Squaresoft's usual graphics excellence, Romancing Sa-Ga 3 is a must-play for every console RPG fan, and any PC RPG gamer who thinks all console RPGs are cakewalk. You can now play the game in English (it's not 100% complete, but it is definitely very close to that). Here is hoping that the other games in the series will soon be translated as well by dedicated fans. 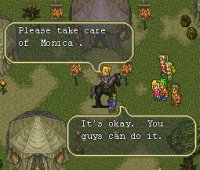