In addition to being one of Square?s most underrated games, Bahamut Lagoon is one of the best strategy/RPG hybrids ever made ? a genre popular on the console systems (popularized by games such as Ogre Battle and later Final Fantasy Tactics). Released by Square in Japan for the Super Nintendo system in 1996, the game unfortunately was never translated into English. Thanks to the efforts of DeJap Translation fan group, you can now play this classic in very well-translated English. One of the translators, Tomato, said it all about this old game:

"[Bahamut Lagoon] is an RPG in that you walk around places and talk to people, buy things, and the like. The battles are also kind of like Final Fantasy VI. Unlike FFVI, however, you get to control multiple parties and move them around maps to attack enemies strategy game-style. A cool feature of this game is that you can alter the maps to your advantage (or disadvantage). If the enemy's in a forest, light the forest on fire and they'll receive damage as long as they stay there. Destroy bridges, create ice walkways, destroy walls, and more.

The game itself is rather linear. But that doesn't make it boring. One of the biggest parts of the game is raising your attack dragons. Depending on what you feed them, they might become Master Dragons, or they might become wimpy, weird looking dragons that do nothing. There are tons of types of dragons they can become, so raising them and evolving them into different forms will keep you occupied. Don't worry, it's not as lame as it sounds :D

Another cool feature is a New Game + type thing. After you finish the game, you can start over with all your stats and items! With that, and the extra bonus dungeons (which can be really hard), you'll be spending a lot of time playing this game.

Square does a lot of nifty effects to achieve some of the best SNES graphics ever. It's certainly one of the prettiest 2D RPGs out there, and the battle animations... well they're just sweet. You'll think it's a PSX game or something."

If you enjoy console-style RPGs in general, Bahamut Lagoon is a must-have. If you dislike console games because you think all of them have shallow gameplay and offer no challenge, Bahamut Lagoon is the one game that will change your mind.

Square's last, and visually most impressive, offering to the Super Nintendo genre of role-playing games was a little known title called Bahamut Lagoon. Unfortunately, this often-touching, always gorgeously presented game was never made available in America. One either had to play it in Japanese or find a translation patch online, of which DeJap's patch is the most completed. However, any true strategy fan would do well to download this game; it offers traditional Ogre Battle-style map-based combat combined with the thrill of raising and training magnificent dragons.

Bahamut Lagoon's premise is simple: the kingdom of Conner (or, more directly Romanized, 'Kahna') is under attack by the evil Granvelos Empire, and you, Byuu, must gather up an army of warriors and their dragon counterparts to fight the evil menace. Along the way, you must save the princess Yoyo (what a great name!) from certain doom.

Bahamut offers a twist on the standard map-based strategy combat game; each character has a dragon counterpart who fights alongside him or her, and generally raises hell among the enemy. Different dragons have different abilities; some heal, some attack directly, and others use magical attacks to defeat their enemies. In addition to all this, each character's dragon can grow and change through the use of various items. Just about any item can be 'fed' to a dragon (including weapons and armor!) and each item has different effects on each dragon. Feed a dragon enough fire-based items, and its fire level will go up -- possibly resulting in a transformation. The possibilities are endless; some dragons end up as cute but worthless pink blobs, others as fierce fire-spouting beasts. The similarities to modern games like Pokemon, Monster Rancher and Jade Cocoon are striking, and Bahamut Lagoon may have partly been an inspiration to these sorts of games.

The battle system in his game revolves heavily on mixing troops to the greatest efficiency. Archers, lancers, heavy knights, light knights, swordsmen, assassins, mages, and summoners are at the disposal of the player. The correct mixture of these can make or break a battle, so battle planning is a must.

The graphics in Bahamut Lagoon are absolutely astounding. Transparency effects abound, with layers upon layers of graphics moving independently in many of the 'cut-scenes' to incredible effect. The animation, especially in battle, is not so wonderful, but the individual frames are beyond compare. Square really pushed the graphics hardware of the SNES to the limit with Bahamut Lagoon.

The soundtrack to Bahamut is also incredible; I still get a bit misty-eyed when Yoyo's theme plays. The music is crisp and clear for SNES era hardware and fits the mood perfectly, without getting annoying. It is often tempting to pause the game, lean back, and listen to the music. (I know I have...)

Overall, Bahamut Lagoon is an excellent game, a must-play for any true strategy fan. It's frustrating that it will never see the light of day on these shores, but hopefully a sequel will arise from the ashes of Pokemania and allow us one more romp through Kahna on the back of a dragon... 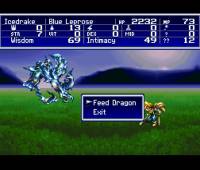