The game starts right after you (that means Kain) have been ambushed and killed by criminals. Closely after this you are back in the world, returned as a vampire, as a necromancer has helped you return so you can "pay back" what you owe to the people that killed you. All this is taking place in a well made game even when you take the limited amount of things you can do in the game into consideration (yes you guessed it - I'm a fan of the Elder Scrolls).

There are two different game types in Blood Omen like the action related scenes and of course the more mysterious puzzles in the game. The game does offer a lot of action as to help you in this you are equipped with a sword to begin with. Later on you can find many other items, including magic ones, but just remember this game isn't one of those hack 'n slash games where you have to kill everyone. You must remember that you are a vampire and as we all know they have certain needs...

Blood Omen: Legacy of Kain is great action roleplay with tons of unique features (mostly because only very few games offers the player to play as a vampire) and when you add many of the different roleplay aspects in the game you get a great mix. And of course you shouldn't ignore the well done graphics either that helps making the game atmosphere quite close to the different scenes and characters you will see in the game. Overall a great game that you should really give a try.

Arguably the closest RPG for the PC to ever rival console classic Legend of Zelda in gameplay and sheer addictiveness, Blood Omen: Legacy of Kain from Stormfront Studios/Crystal Dynamics is highly underrated game that sold moderately well on the 3DO system, but poorly on the PC (which was published by Activision). Which is a shame, because Legacy of Kain is in all respects a true classic, and one that is much better than its overhyped sequel Soul Reaver.

In this gothic RPG, you play Kain, an adventurer who have unwittingly become a vampire after being ambushed and subsequently murdered by brigands. You wake up in the underworld - where you are made an offer you can't refuse by a necromancer, who gives you the chance to return to life and seek vengeance upon your murderers.

Gameplay, like Zelda, strikes a perfect balance between action, physical puzzle-solving (e.g. find a way to get from point A to B), and gold ol' fantasy world full of items to collect and spells to cast. The fact that you're a vampire has real bearing on the game, and makes gameplay very entertaining (albeit gory) and unique. For instance, you are much stronger at night than in broad daylight, and similar to BloodNet, you have a "blood satiation" meter which you must keep filled at all times by drinking blood off victims (instead of hacking them to pieces with your sword). You are initially armed with only a sword, but as you go through the game, you will pick up various magic items and spells which aid you in your quest. Which, as it turns out, isn't just about taking a bite out of your murderers - you have to save Nosgoth from destruction by killing the Guardians of the Eight Pillars of Balance. You will even acquire the ability to turn into a bat at some point in the game-- a very handy way of getting across vast distances.

There's not a huge amount of character interaction in the game, but this is not a big downside considering that the game's focus is on action and physical puzzles. One cool feature is that you can disguise yourself as a mortal and try to speak to the NPCs, but usually they just give some completely useless piece of information. Your quest progresses linearly - you can't kill the Guardians in any order - you have to follow a specific path. Still, you do have enough freedom, and there are many subplots (which mostly hinge on finding powerful items) to pursue. What is a shame is that you can't save your game whenever you want-- instead, you have to wait until you come across "save posts." Despite this console system-style flaw, Legacy of Kain excels in practically every other department, and its wonderful atmosphere and near-flawless gameplay will keep you hooked into the wee hours of the morning. A must-have for every RPG or action fan, and a true classic.

This game is one of the best 3rd player fighting games i have seen so far. Plus points : The number of weapons( swords) u can choose from, are really grate, u kill an opponent and steal his sword, bigger the sword the better. There are clubs. U can combine with the rage attack, it really kills the opponent. U can combile the atacks with the powers u have as well, such as rage, speek, etc. There are puzzles as well. In short the game is pretty well designed, with a really good story line, incredible weapons, and opponents, power, and level design is amazing. 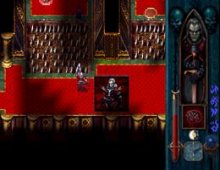