Albion is a severely underrated RPG from the makers of two Thalion hits Amberstar and Ambermoon, which became instant hits on the Amiga but unknown on the PC. The game shines with a richly detailed story, a huge and well-realized gameworld, a novel use of both 2D and 3D views, and some unique puzzles that are a far cry from the normal find-a-button-to-open-door puzzles found in most RPGs. As Tom Driscoll, a pilot who crash-landed on the exotic planet of Albion, you will make many friends and foes in your quest to find the mothership Toronto. The game is truly an epic adventure that spans vast areas and cities, all of which are teeming with colorful characters who always seem to have something to say. Puzzles are adventure-game style (i.e. use items from your inventory) mixed with standard find-secret-door-and-avoid-traps puzzles. None of them is dull, however, because each building and dungeon you enter is so well detailed and differentiated from each other, that exploration is never boring. With great graphics, fun 3D combat sequences, and a truly epic and captivating plot that could make a real novel, Albion is simply a must-have for all scifi & fantasy RPG fans. Highly recommended, especially to fans of Wizardry games. 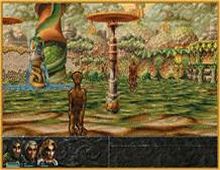 People who downloaded this game have also downloaded:
Betrayal At Krondor, Bahamut Lagoon, Lands of Lore: The Throne of Chaos, Aleshar: World of Ice, Anvil Of Dawn