Aleshar: World of Ice is one of the best shareware RPGs ever made, although it remains very obscure due to lack of publicity or marketing (and perhaps high cost of registration as well ;)). The game is set in a distant island of Aleshar, where it's always winter and cold. Your goal is to find ways to harness and use the Elemental Powers within you, while avoiding prosecution by the powerful Cult of Wisdom (the only legal user of magic) that hunted and executed your grandfather who refused to become a priest.

The game is played from an overhead perspective, much like old Ultima games, except the game uses isometric graphics instead of 2D tiles. The game plays like a standard RPG, with some nice touches and unique skils. For example, high skiing skill allows you to travel faster, and high climbing skill will make you move faster on snow slopes. Magic plays an important role in the game: once you learn how to use magic, you will use a combination of runes and elements to cast spells in the game. You can adjust the power of each spell by varying the number of runes used. One of the best things about the magic system in Aleshar is that each spell has two modes: hostile and friendly. When you aim the spell against an enemy, it will be harmful. When you cast the same combination over an ally or yourself, it will be helpful. Discovering what both modes mean for different spells is always fun and interesting.

Don't be mistaken by the game's shareware (and now freeware, thanks to the designers) status-- Aleshar is not a simplistic RPG you can finish in a few evenings. The gameworld is huge, the combat always challenging, and you will have to pay attention to real-world factors such as hunger and fatigue level. You can hunt for food, but you may die of starvation if you're not successful. The graphics are a bit too small for my taste, but once you get used to it, it's not that bad. Overall, Aleshar is a quality shareware old game that is well worth a try for all RPG fans, especially anyone who likes long game and challenging fights.

Although Aleshar: World of Ice existed as a shareware game for more than 3 years the developers have now decided to release the game as public domain meaning that it is free to download. The main theme in the game is magic as many spells are involved and you also have to avoid getting caught by the Cult of Wisdom since they are the only ones that are allow to use magic.

While you could expect a simply story, simple skills and other quick roleplay features because of the freeware status Aleshar: World of Ice is actually offering an impressive list of features and is a much larger game than many commercial roleplay games. Like with a game like Ultima 6 you see the game from the top although controlling your character and the general gameplay is much smoother. Some of the small but well done features are that you have to remember to eat food or you will starve to dead. Of course you also have to find food before this happens so besides the regular enemies so you also have to keep hold on this kind of things.

There are tons of different spells and they have been divided up into two categories - friend and hostile. Of course you will use the friendly spells mostly. Note that all spells are described within the game so I highly recommend you take a look at them as not all of them are obvious to understand just from the name. A well done game for the true roleplay player. 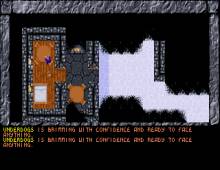