In 1996, Alien Software released the first three episodes in the Neophyte universe, an RPG gameworld similar in style to anime RPGs commonly seen on console systems. The episodes, all released as shareware although they are complete games in their own right, quickly garners a sizable cult following among fans of console RPGs. It's safe to say that until Squaresoft ported its successful Final Fantasy series to the PC, there was never a better-looking, more faithful console-style RPG than Neophyte. Unfortunately, Alien Software disbanded, and the complete game (which would combine these freeware episodes, as well as additional ones, in a huge gameworld) was never released.

The Journey Begins is the first episode in the series. Although basically a rip-off of Secret of Mana for the SNES, the game is still notable for an excellent production value and strong gameplay. Phil Glanville has the lowdown in his review for Games Domain:

"It's fairly obvious that the developers of Neophyte have played SquareSoft's The Secret of Mana on the SNES. [The hero of the game,] Thael, looks and moves very much like the hero of Squaresoft game, even down to his hair flapping over his headband. Add to this the Manga cartoons, the 'slime' monsters, and, let's face it, the damn plot, and you have what amounts to a PC version of the classic SNES game.

Not that this is a bad thing in any way. In fact, the resemblance to SOM works completely in Neophyte's favour. Though the game's graphics don't exactly look up to spec compared with, say, Diablo or Myth , they have a great cartoon retro feel to them which they owe entirely to SOM, whilst managing to eclipse anything that the SNES could offer.

As with all RPG adventure games, the object is to wander around a monster-infested world, smiting the lowlier evildoers until you have enough experience and cash to equip yourself with the mightiest sword and armour before going off to clobber the big bad guy himself, in this case, the evil wizard Vacmatio, who has captured the beautiful princess Aphea and is planning to sacrifice her... Of course, being the first part of the adventure, you can't expect to find all the Orbs that the blurb goes on about, but you'll have the opportunity to give Vacmatio a good kicking. You start out in your village, which you need to explore, gaining various items of equipment and tidbits of gossip that you can piece together to give you clues that will help you in your quest... You'll need to return to the village from time to time to buy more powerful weapons, armour and health potions. The characters in the village (and in fact throughout the game) tend to stick to a defined area, and have very little to say once they've told you their gossip. This isn't too much a problem, though, because the main point of the game is to get out and beat up those baddies.

Controlling Thael is ridiculously easy; use the cursor arrows to move around, the ctrl key to use a weapon, the alt key to use a tool, and the space bar to talk to a character. You access your inventory, select your weapons and armour, and investigate your stats by pressing 'I', and get to the load/save game menu using Escape... And that's it. One minor niggle that I had with the presentation is that the character of Thael remains the same no matter what equipment he's carrying; place him in full plate mail and he looks no different to when he was wearing a simple cloth shirt. Oh well. Outside the village, there are plenty of different locations to explore, lots of monsters to attack, and a fair few puzzles to solve. The biggest criticism I have of the game is that the puzzles are, for the most part, very easy. I don't want to give away too much of the story, so I won't go into details, but the one time that I was completely stumped by a puzzle, the solution turned out to be so completely random that there was no way I could have solved it on my own (yes, I had to mail Aliensoft for help...). This left me a little disappointed, which is a shame, because I really did enjoy myself 99% of the time." Definitely a good beginning to the short-lived series, and must-have for every fan of console RPGs.

The best news is that although Alien Software may be gone, the new operator of their domain name has acquired the rights to distribute these shareware gems on the website. Go there today to download one of the most overlooked anime RPGs ever made! 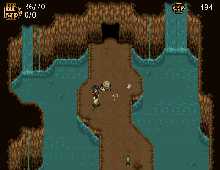