Lord of the Rings... who doesn't know the fantastic book trilogy by J.R.R. Tolkien? This game contains the whole story from the first book. The one ring has been passed to you, Frodo Baggins, from your uncle Bilbo. Aided by your friends Merry and Pippin you now carry that burden to finally destroy it (although that comes in the third book... which no game exists for - at least not in this form). On your way you will also find others willing to help you - including the characters you know from the book (or the movie) like Gandalf, Aragorn and Gimli.

The gameworld is huge and contains many sidequests - however the game is not exactly easy to solve. This one's a sure must for every fan and it makes a great RPG for the advanced player.

Ah, Lord of the Rings! The book that started it all... Elves, dwarves, halflings, orcs... None of that existed before the brilliant mind of J.R.R. Tolkien wrote his masterpiece. The book has already made millions of fans and this game closely follows Frodo's voyage.

As expected, Interplay created one fine role playing/adventure game. You will be introduced into the game by a short motion picture intro, described in the book's first chapter. You will learn about Bilbo's adventures, his ring, Gollum, Gandalf and the evil that threatens Shire in which Frodo, the main character lives. Your quest is to go to Mordor, find the eternal fire and destroy the evil ring before Sauron, the evil lord manages to get it from you.

Top-down view, average graphics and great gameplay. You will need a lot of time to complete this great RPG and I asure you that all true LotR fans will be more than pleased!

Commonly regarded as one of the best Tolkien games ever made, Interplay's adaptation is an excellent blend of RPG and adventure that vividly captures the spirit of Tolkien's worlds through cutscenes and vibrant in-game graphics. The only downsides I can think of for this cult classic are: no automap feature (added in the CD-ROM version) and numerous combats (althought most are avoidable). The game is truly epic in scope and design, and the fact that it does not follow the book too closely leads to numerous side-quests and different paths to the end. Highly recommended. 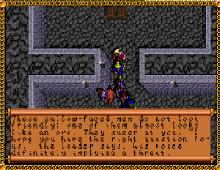 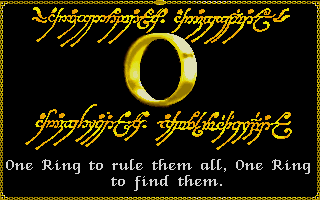 People who downloaded this game have also downloaded:
Lord of The Rings 2: Two Towers, Zelda Classic, Dungeons & Dragons: Warriors of the Eternal Sun, Eye of The Beholder 1, Bard's Tale 1