Temple of Apshai Trilogy is very similar to the classic dungeon crawler Rogue. This game does offer additional features and improved graphics but still very similar things like seen in Rogue. What the game doesn't include is a good story which means it seems rather pointless wandering around in the different dungeons as you can't live you that much into the game then.

The actual game starts by that you create your character (not with that many options), buy your equipment and then visit the different places you can go to. Most of the places you can go to are fairly small and you quickly get tired of fighting the same monsters over and over - especially when they are particular exciting to look at either.

Overall a game not as good as Rogue but if you are a fan of the roleplay genre it's still nice to see how one of the first roleplay/dungeon crawler games was like as these old games actually offered many of the same things as today's roleplay games - even if it doesn't look like it at first. But in the end not a recommended game.

One of the earliest pioneers in the RPG genre (the first entry Dunjonquest, was released in 1982!), Epyx' Temples of Apshai Trilogy are semi-fun dungeon hack RPGs with an almost nonexistent plot but high playability quotient. Best described as the graphical version of Rogue, you play a lone adventurer who is exploring the ruins of the temples of Apshai, looking for treasures and ways to build up your stats. The game is played from a top-down perspective, with more than adequate graphics. Although the game is a spiritual descendant of Rogue, there aren't nearly as many weapons to wield and monsters to kill, and the dungeons look very much the same after a while. Recommended only for anyone who's interested in the history of RPGs, although the (older, and more primitive-looking) Rogue is ten times more fun and replayable. 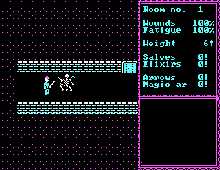