Shining in the Darkness

Shining in the Darkness is a fun dungeon hack RPG for the SEGA Genesis that is relatively obscure, probably because very few Genesis gamers are fans of this RPG style, and fans of hack & slash RPGs on the PC wouldn't have had the exposure to this game. Thanks to emulators (and this review, of course ;)), PC gamers can now experience another forgotten RPG gem.

While Shining in the Darkness may be the precursor to much more popular Shining Force strategy/RPG series, it's a very different kind of game. The premise is basic: Thornwood used to be a peaceful kingdom until the evil Dark Sol came and abducted Princess Jessa and Sir Mortred, one of the king's most trusted knights. You, the only son of Mortred, must journey deep into Dark Sol's labyrinth with two friends to rescue the abducted and defeat Dark Sol.

The game is played from the first-person perspective like a typical dungeon crawl on PC. You fight monsters in random encounters, occasionally returning to the village to sell the loot, buy more powerful weapons, cure your party members of poison or curses, or get tips from patrons in the tavern. Occasionally you must fight large "boss" monsters, but most encounters are random. The deeper you go, the tougher the monsters you will face. Fortunately, battles at the beginning of the game are easy, giving you plenty of time to practice (the premise for this easy stage is that you must find a special item on your own to pass the "Trials of the Ancients" and be allowed to leave the castle with your friends). One nice feature is that you can turn ore into equipment of your choice, and the locations and identity of many items in the game vary from game to game, making it quite replayable.

Intuitive interface, creative monsters, and fun battles make Shining in the Darkness a fun dungeon crawl that should appeal to fans of PC-style hack 'n slash. It's not overly complex, but it provides enough challenge to give you the satisfaction of killing a boss monster or Dark Sol himself. The game has 10 levels (some with 2 floors) that require mapping, but are not too large that you will get lost in. The game is longer than an average RPG on the console, but not as difficult as similar games on the PC (say, the Eye of the Beholder series). If you're looking for a fun, challenging, but not very difficult dungeon crawl, check out this forgotten classic on the console. Highly recommended! 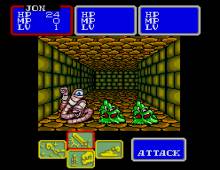 Shining in the Darkness screenshot

People who downloaded this game have also downloaded:
Betrayal At Krondor, Zelda Classic, Dungeons & Dragons: Warriors of the Eternal Sun, Lord of the Rings 1: Fellowship of the Ring, Treasure Hunter G