Shadow Sorcerer is the last game from Strategic Simulations Inc. where you can actually control any of the original characters from the Dragonlance books. You start the game with the famous brothers Raistlin and Caramon, Tanis and Goldmoon. Other characters from the books like Laurana and Tasslehoff are included as well which makes Shadow Sorcerer more interesting for fans of the original books.

The game is real time each game screen is divided up into small fields and you can only move your characters within those. While it's real time it's hard to move more than one character at a time unless they have to walk for a longer time. The interface is easy to use as you get a full menu of possible actions available with a simple click on the character. When moving around you can encounter different enemies including Draconians. The combat is real time as well and you don't have much influence when these takes place. Depending on which character you have selected a range of combat actions are included such as spells, melee attacks as well as regular bows.

While the game doesn't offer as much gameplay as a game like Champions of Krynn (as the game area is not that big) it still offers some good things and with a bit more work on the graphics, game area and movements Shadow Sorcerer could have been made into a really great game. Instead you get a somewhat decent game offering some good gameplay - but not a lot of it in the end though. Still a good game, especially for Dragonlance fans.

Shadow Sorcerer is SSI's third (and last) of the non-"Gold Box" AD&D titles, along with Heroes of the Lance and Dragons of Flame. While Lance and Flame were loosely based on the first two original Dragonlance adventure modules written by Margaret Weis and Tracy Hickman (who also wrote Death Gate cycle books). Shadow is based on the third and fourth modules (I own a copy of all four paper adventures). Another interesting note is that Shadow was released with an included copy of the second book in the "Meetings Sextet" series of the Dragonlance novels, which would have driven its original sales more had the game been better.

The game, in an isometric 3D view, is a very intriguing quest game. With many locations to explore, this game could have been a nice exploration and strategy (moving the ex-slaves to temporary shelters) game. However, the pressures of time (and this big red dragon that will obliterate you) rush the game right into the end. This is the most disappointing aspect, since I like unlimited exploration games, and there is much to see in this game.

Overall, despite the lack of time, I like this game. Anyone who likes Dragonlance adventures (and the Chronicles series of books) will enjoy this and its predecessors greatly. Just don't expect anything spectacular. 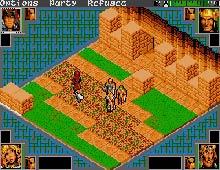 People who downloaded this game have also downloaded:
War of the Lance, Curse of the Azure Bonds, Dark Queen of Krynn, The, Dungeons & Dragons: Warriors of the Eternal Sun, Pool of Radiance