Shadow of power is a fun, big freeware RPG game in the style of Zelda, combining action elements with standard console-style RPG gaming. The plot is simple, but adequate: you are Holger, a young lad who wants to become a hero. Here's the more (melo)dramatic version of the plot straight from the official description: "On the day that Holger decided to help the crying girl and wanted to become a hero his story started. His life changed forever. There was no turning back: The man with the golden armor, the box; strange things had found a way into his life things he was not able to control. But Holger had the feeling that it was not only him who changed... The people around him seemed to be anxious. A shadow seemed to lie over his home land, a mighty shadow that dreaded to impunge everything that dared to try to stop him."

The game looks and plays very similar to Zelda. You control Holger from an attractive semi isometric view using a simple interface: hit CTRL to attack, ALT to cast spells, and simply bump to characters to talk to them. You start out with three red hearts representing hit points, but will gain more hearts as you progress. Unlike typical RPGs, there is no complicated statistics in Shadow of Power to keep track of, and the game has a nice balance of inventory-based puzzles and physical puzzles (e.g. move the boulders in the correct order to retrieve an object). The graphics are colorful, the writing interesting, the gameworld vast, and the tasks nicely varied. A feature I really like is the F1 key, which shows the current task you have to finish. The red arrow at the edge of each screen shows the direction toward the next location you have to travel to, so you will never get lost. These user-friendly features make Shadow of Power even more accessible to beginners, and shows the care that went into creating the game. If you like Zelda, you will find Shadow of Power a wonderful console-style RPG that is well worth your time. Highly recommended! 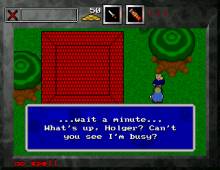