Lost Valley is an excellent freeware action-oriented RPG that offers over 25 hours of gameplay, a lot of neat weapons and magic items, and smooth animations. Similar to Zelda, you will roam a huge gameworld, battling a lot of monsters and collecting goodies that dot the landscape. The (mostly nonexistent, but unimportant anyway) plot: in order to save your realm, you must enter Lost Valley to find 12 crystals hidden in various dungeons. Similar to Zelda, action sequences and RPG elements (mostly in the form of finding better weapons and gaining experience points) blend together into a very fun package.

One of the best things about Lost Valley is the sheer size: the game map spans over 1,000 screens, and that excludes hundreds of side-scrolling screens that are used to represent close confines (such as when you enter a cave). Although most graphics are "ripped" from other games - something that many amateur RPG makers frown upon - they are very well used in the game: you won't find any incongruent patch of Castlevania graphics next to Sonic landscape, for example. Another thing I really like about the game is the various "special techniques" such as whirlwind attack, recovery power, and other abilities that you will only gain with enough experience - and with collecting crystals. Although a lot of equipment can only help you in battles (armors and shields for instance), there is a lot of items that will help solve your quests or make navigation easier (the compass and "aqua boots" for example).

Although the first release of the game was ridden with bugs, poor writing (mostly because the author is French whose English is not very good), the latest version you can download here is much improved, thanks to the help of many avid fans of the game that used the forum on this very site as a center for their discussion :) With hundreds of monsters, fluid gameplay, excellent graphics, and fun special techniques and items to use, Lost Valley is definitely one of the best - and most underrated - freeware releases in 2003. Highly recommended if you like Zelda, console-style RPGs, or platformers. 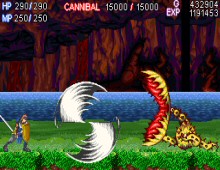 People who downloaded this game have also downloaded:
Lord of the Rings 1: Fellowship of the Ring, Lord of The Rings 2: Two Towers, Shadow of Power, Druid: Daemons of the Mind, Lands of Lore: The Throne of Chaos