Snatcher is an excellent anime/cyberpunk adventure game for SEGA CD. If you haven't played it, go check it out from the nice shiny links at the bottom there. Admire its immersive qualities and strong storyline. Now think what would happen if it was remade by an RPG fan on drugs. Welcome to SD Snatcher.

SD. Small bodies. Giant heads. Super Deformed, see? It does take a bit away from the serious sci-fi atmosphere, what with everyone resembling a cute cartoon doll you'd win out of a crane machine, but the story is still as strong as it was before, although there are a number of differences to the original, none of which I'll spoil for you. Suffice to say you may get a few surprises, even if you've played Snatcher from beginning to end.

The overall intro remains the same. 2042, Neo-Kobe. 50 years after a disaster in Russia that killed most of the world's population. You play Gillian Seed, a man without memories, who can only remember one word about his past - "Snatcher".

Gameplay consists of Final Fantasy-style top-down wandering around locations and talking to characters. Some areas you visit are filled with enemies scuttling all over the place. Touch one, and combat begins. This avoids the "random battle" element that plagues so many games like this. Don't feel like fighting? Just run past them. Be careful though. Avoid too many fights, and you won't be strong enough to face what might be around the corner..

SD Snatcher does have the strangest combat engine I've seen. A mixture of Final Fantasy and Duck Hunt is the only way I can describe it. Select your weapon, then aim the crosshairs at what you want to shoot at. Tactically, you can aim at different parts of the enemy, like the sensors to decrease their accuracy, or their weapons to decrease firepower. Sometimes combat can get a bit frustrating, with some areas having dozens of identical enemies to wade through. Luckily, once you've fought an enemy once, you can automate the combat against it, letting your robot pal fight instead. I've found this to be a bit awkward though, and ended up losing quite a few battles which should have been walkovers. Only happened once or twice though. Hint - If the enemy keeps sidstepping your attacks, aim for the wheels or legs.

The actual RPG side is a tiny bit weak, with only 3 stats represented (Strength, Speed, Defense), with fairly linear progression. Killing enemies results in the usual experience and gold, the latter you can use to buy ammo for your(albeit limited) selection of weapons, health drugs, or other items such as grenades and explosives.

The game was released with a special sound-cartridge, and as such sounds absolutely fantastic for an 8-bit game. Graphics are decent, with some good detail on the enemies, especially during combat.

There are a few quirks with the game..the unofficial English translation is occasionally a bit eccentric, with a few spelling and grammar mistakes, but it more than does the job for anyone looking to enjoy this title without having to learn a new language.

All in all, a fairly mixed bag that was released only for Japan's MSX2 computer. It's a fantastic experience being able to see the Snatcher universe from a slightly different perspective, and whilst combat can get repetitive, the motivation is there to keep going just to find out what happens next in the story. I recommend you do check out the original Snatcher before playing this, however. Things will make a lot more sense if you do. 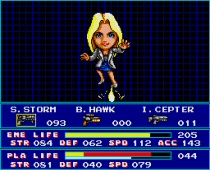