Knights of Legend ranks to this day among the most detailed RPGs ever created. It was designed to allow for future expansion packs that, unfortunately, never came out. In your mission to vanquish the evil lord Pildar, you will choose your party members from 33 character classes, equip him/her with weapons chosen from hundreds of choices, and gather information from literally hundreds of characters, not to mention numerous side quests and monsters to kill, and amazing level of detail (for instance, you can get fatigued without rest, which will erode your abilities to fight in battles). Most battles are long and and can involve dozens of monsters, but the wide range of combat options for each character (e.g. attack, rest, cast, put weapon in belt, and choice of counter attack) adds an interesting tactical element, and rewards from winning battles are high. Origin's ability to fit this *huge* game on a few 5.25" disks must be one of the most amazing programming feats in the whole of gaming history. Simply a must play for all RPG fans. 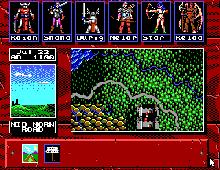 People who downloaded this game have also downloaded:
Lands of Lore: The Throne of Chaos, Pool of Radiance, Betrayal At Krondor, Pools of Darkness, Dungeon Master